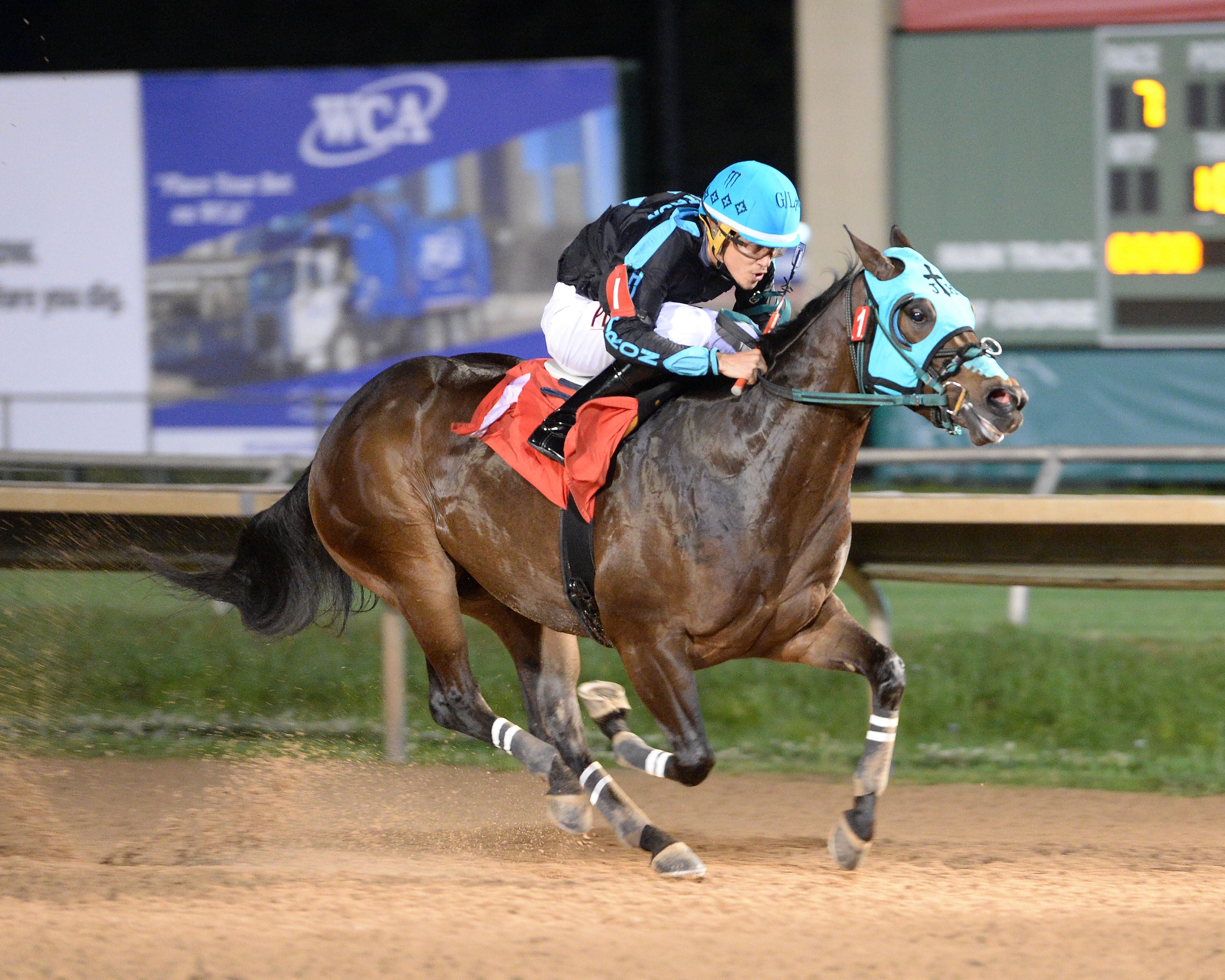 TRUMP MY RECORD CRUISES TO HIS SECOND MAJOR CHAMPIONSHIP OF THE YEAR SCORING A VICTORY IN THE $459,700 SAM HOUSTON FUTURITY(G2) AT SAM HOUSTON RACE PARK

The richest race of the 2019 Sam Houston Race Park Quarter Horse meet, the $459,700 Sam Houston Futurity (G2), was contested on Friday, May 3. It was another spectacular performance by Trump My Record, who scored his fourth victory of 2019 for owner Cruz E. Nava of Lytle, Texas.

Bred in Texas by Fulton Quien Sabe Ranches LP, the son of first-crop sire Apollitical Blood out of the Pyc Paint Your Wagon mare Breck N Records was purchased for just $10,700 at the TQHA Yearling Sale. He broke his maiden in trials for the $254,070 Harrah's Entertainment Futurity (G3) and returned on March 20 to win the final.

Nava and his brother-in-law Arturo Davila III who trains the bay colt, had several options following the victory at Harrah’s Louisiana Downs, but wanted to showcase his talent in Texas. They paid the $7,500 supplement for the Sam Houston Futurity and he set the fastest time in 15 trials three weeks ago, covering 330 yards in :16.566 seconds.

This evening, with regular pilot Eddie Sanchez in the irons, Trump My Record won the final in gate-to wire fashion in a final time of :16.543, earning a 104 speed index.

“He’s phenomenal,” said an emotional Sanchez. “He broke well and in front; I could see Pa Cha Ching coming, but got to the wire in time. I’m speechless!”

“We feel so blessed,” said Davila. “He just keeps doing it. I think tonight he really put a stamp on how good he is.”

“I want to dedicate the win to my grandfather, Alejandro Dovalina, who lives in San Antonio,” added Davila. “He brought horses into our lives and is a big part of our success.”

Davila and Nava are planning on running their champion in the TQHA Sale Futurity this July at Retama Park and also have the Texas Classic Futurity at Lone Star Park on their radar.

He joins a distinguished list of past Sam Houston Futurity champions, including 2014 AQHA Champion 2-year-old colt, Kiss My Hocks; Azoom; Snowy Alibi, Ivan James, Especially Tres and This Is An Eagle.

LQHBA Champion 2-year-old filly  Eysa Jess Jumpn may even have more potential as a 3-year-old. She dominated her nine rivals in the $167,500 Sam Houston Derby (G3) returning as the fastest qualifier from trials held on April 12.

Owned by Jose Estrada Quarter Horses and conditioned by 26-year-old Josue Huitron, the daughter of Heza Fast Dash out of the Mr Jess Perry mare Jess Jumpn broke well from her rail post, edging clear in the 350 yard final by a margin of 1 ¾ lengths in :17.268 seconds.  Rider Guadalupe Lucio, Jr. had the return call, and the duo earned a 105 speed index.

“I was 19 years-old when I first rode her,” said Lucio. “She keeps surprising us every time. She leaves the gate well, never weakens and just loves to run. It is an awesome feeling!”

“She is a dream,” said Huitron. “Every time she runs, she gets better and nothing bothers her!”

Eysa Jess Jumpn is the first horse Jose Estrada ever purchased and he knows how fortunate the team is to have such a classy champion.

“She is amazing and I want to thank our rider, Josue and his brother, Joel and all the grooms,” said Estrada.

Longshot Runnin For Corona, who was the eighth-fastest qualifier, closed for second under jockey Victor Urieta, Jr. Zoomin Patriot was next and Paint Me a Sinner completed the superfecta. Lj Moonrise, Makelogangreatagain, Mr Corona Crystal, Dess Jetting Diva, Jess Master Angel and All Sophia Wanted followed.

Eysa Jess Jumpn ($3.00) is paid into the Delta Downs Derby, and will return to Delta Downs, according to Huitron.

The $45,970 Sam Houston Juvenile, at 330 yards, ran as the first stakes of the  Friday Sam Houston Race Park card. The field was comprised of 2-year-olds that competed in trials for the Sam Houston Futurity three weeks ago but did not qualify in the top ten.

Expedyte, a Freighttrain B colt owned by Raedele Phipps and trained by Josue Ponce won his trial in :16.878, despite being bumped out of the gate. Breaking tonight from the eight hole, he closed powerfully under rider Jesse Levario and won the final in:16.697 seconds, into a 5 mph headwind.

"He got bumped in the trial, but tonight got away good and really turned it on halfway down the track," said Levario.

Bobby D. Cox bred the brown colt in Texas from the Shazoom mare Shazumba. The second dam is the Grade 1 Ruidoso Futurity winner All About Ease.

Ponce said that he will likely make his next start in trials for the Firecracker Futurity at Delta Downs.