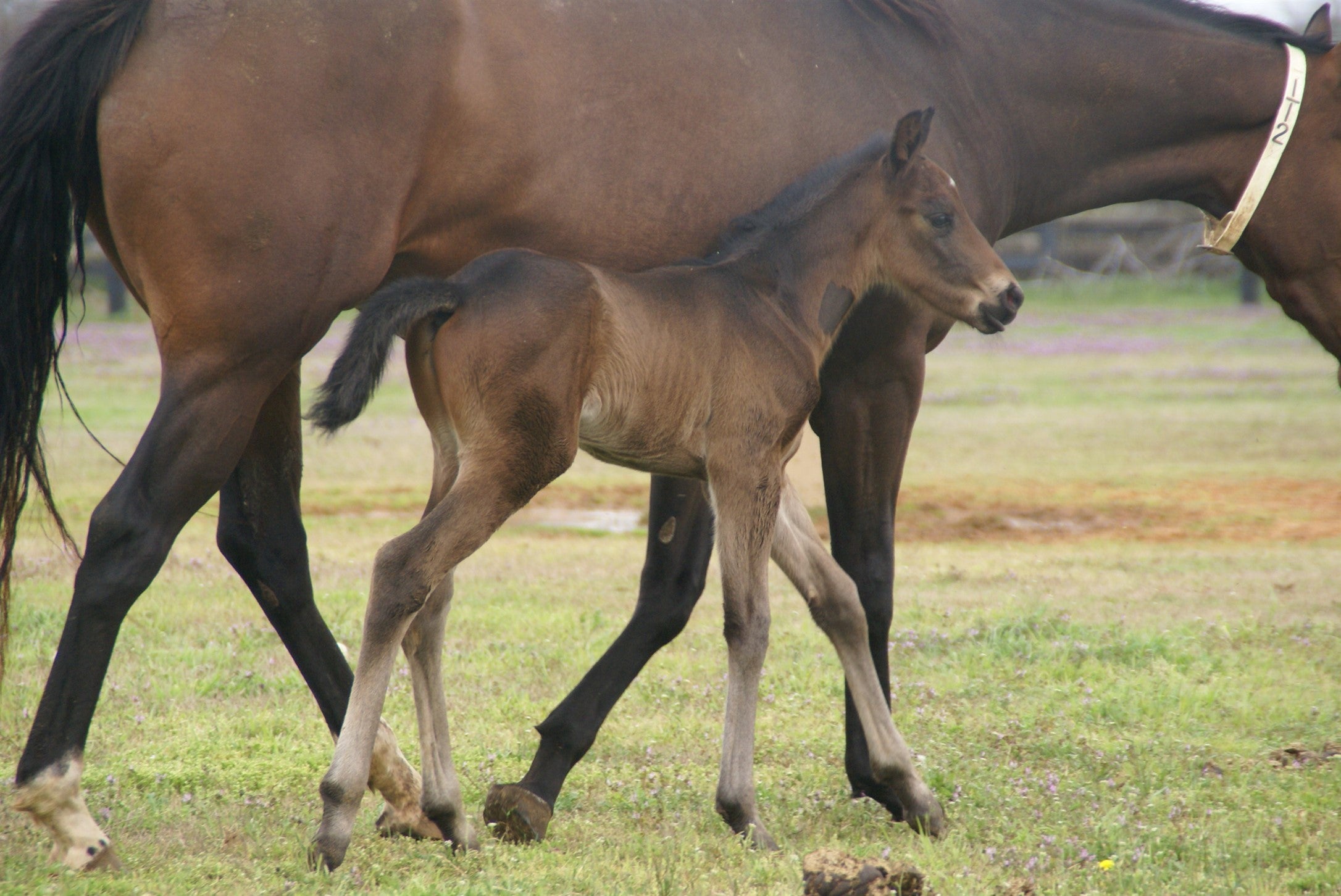 Spring is in the air and one of the most endearing benchmarks of this time of year is the birth of our future racehorses! While the breeding farms in Texas had a rough go in recent years, the recent passage of House Bill 2463 has elicited a strong turnaround in 2020.

Thoroughbred owner Staton Flurry proudly announced on Twitter that his first Texas-bred colt arrived on March 3.  He purchased a mare named Waters Fine at the Keeneland January Sale, who was in foal to 2013 Belmont Stakes champion Palace Malice. Flurry contracted with Valor Farm in Pilot Point Texas to send his mare to Texas and the gangly but adorable foal will be eligible to compete in Texas-accredited stakes when he reaches racing age.

“The money is getting good in Texas and there are opportunities to race almost 12 months a year,” said Flurry. “So, I said let’s give it a shot and see what we can do in Texas.”

Flurry, 29, is a passionate Thoroughbred owner from Hot Springs, Arkansas. His family’s Flurry Racing Stables, LLC has campaigned a quality group of stakes winners at Oaklawn Park, Churchill Downs, Indiana Grand and Louisiana Downs.  He owned Imma Bling who won the 2018 Spirit of Texas Stakes at Sam Houston. Flurry made the trip to Houston to accept the trophy for the gray son of Too Much Bling who soared to an 11-length victory in the six-furlong sprint under Quincy Hamilton.

His horses are trained by Karl Broberg, Brad Cox and Ron Faucheaux and the energetic and enthusiastic Flurry does a very good job of enlisting new owners into various partnerships.

“I have some buddies that will get in for $3,000 and have the opportunity to come to the races and get their pictures taken,” he explained. “I’m pretty honest in telling them about the highs and lows of owning a racehorse, but it’s neat to make your first trip to the winner’s circle.”

Flurry has plenty of win photos and trophies courtesy of his top money earner, Mr Misunderstood. He purchased son of Archaracharch at the 2016 Ocala Breeders’2-year-old in Training Sale. At the time, he might have been nervous about signing a $130,000 sale ticket, but Mr Misunderstood evolved into a splendid turf runner for Flurry and Cox. The dark bay gelding won the 2017 Super Derby at Louisiana Downs, and followed that with seven additional stakes including the Grade 2, Wise Dan and back-to-back editions of the Grade 3, River City Handicap at Churchill Downs.  He currently boasts earnings of $918,204.

Flurry has seen a picture and video of his Texas-bred colt and hopes to make a trip to Pilot Point to meet the already handsome weanling. He named Mr Misunderstood from the song by country western artist Eric Church, but laughed when asked if he has named his Palace Malice colt yet.

“I have no clue,” he said. “One of my favorite baseball players is Lance Berkman; I tried to name one of my horses Berkman, but it was already taken. Once I lay eyes on this colt, something will pop into my mind!”