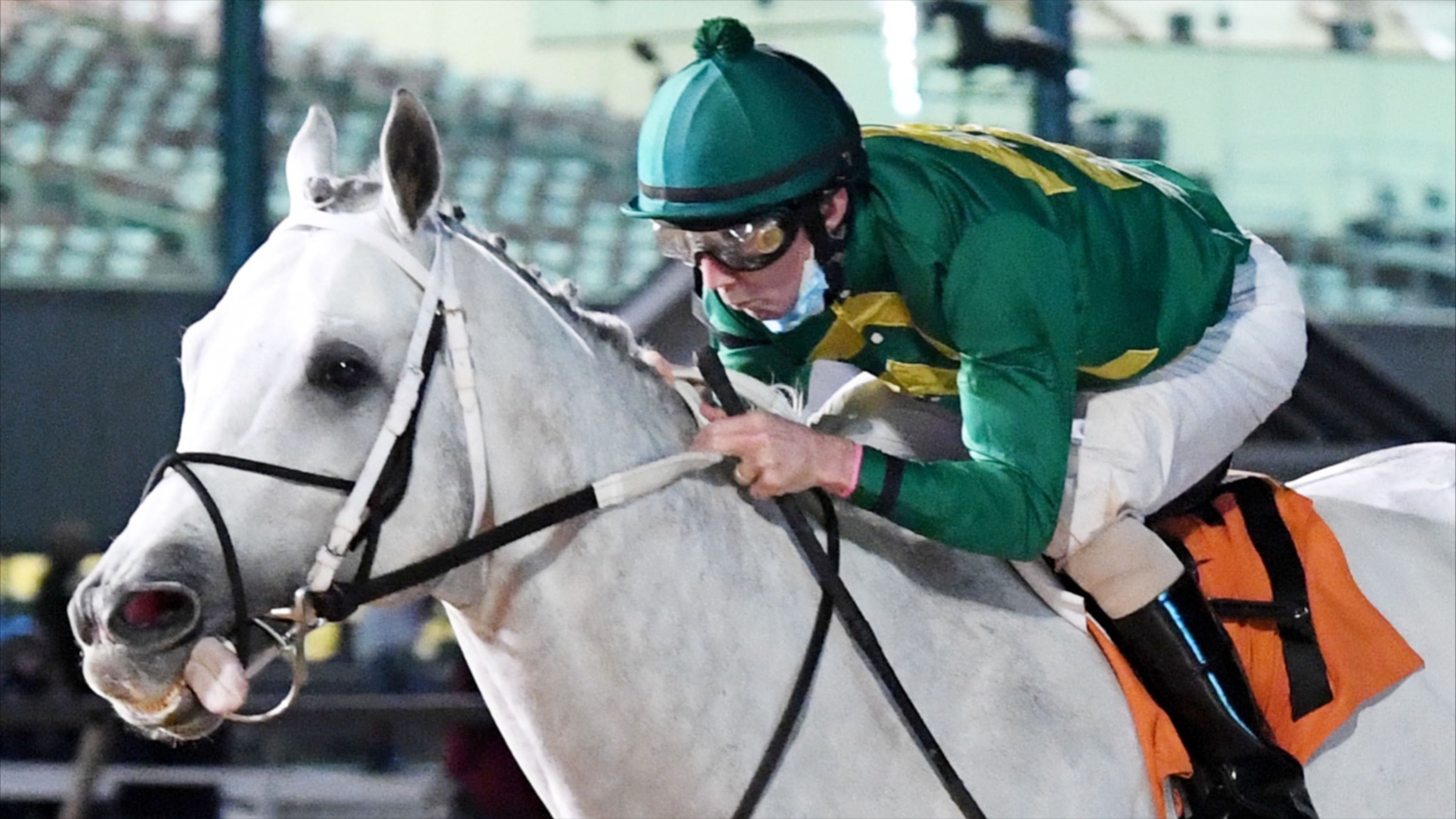 HOUSTON, TX- Sam Houston Race Park hosted a successful edition of Texas Preview tonight, one week later than originally planned. The winter storm that rocked Texas with sub-freezing temperatures and icy road conditions forced the cancelation of the entire week of racing at the northwest Houston racetrack. However, a very exciting night of stakes action was on display this evening, beginning with the $75,000 Two Altazano and continuing with the $75,000 Miss Bluebonnet Turf;  $75,000 H-Town Stakes; $75,000 Houston Turf and $75,000 Jim’s Orbit. The annual event serves as a preview for Texas Champions Day, which will take place on Saturday, March 20. Purses for each of the seven Champions Day stakes showcasing the established and rising stars of the Texas Thoroughbred industry have been boosted to $100,000 this year.

After impressing in her Sam Houston debut last month, Star of the North returned to the winner’s circle for another stakes victory in the $75,000 Two Altazano on Saturday night. The flashy filly battled for an early lead before drawing off to win by over seven lengths, her largest margin of victory to date.

The 3-year-old became the first stakes winner for her sire, The Hunk, in her previous race at Sam Houston, the Darby’s Daughter for Texas-sired fillies. She was bred by Eureka Thoroughbred Farm, out of Always a Star (IRE), by Danehill. Trainer Francisco Bravo has conditioned the filly in all five of her starts for owner Michael Grossman.

Jockey Ry Eikleberry has been aboard for all five starts and was very impressed with her effort tonight.

“She has a ton of natural speed,” he stated. “I knew there were two other speed horses to her outside, so my plan was to just sit and ask her when I needed. She just pulled me so easily!”

Saturday’s performance was the third stakes victory for Star of the North and her fourth win in five career starts. The Minnesota-bred filly campaigned at Canterbury Park last summer, where Bravo is a member of the track’s Hall of Fame. She finished third in her debut but returned to break her maiden and win the Northern Lights Debutante Stakesduring the Minnesota Festival of Champions.

“I was concerned that she would have to cover added distance from her last win,” said Bravo. “But it looked like her previous race set her up very well.”

Star of the North ($2.80) finished the six-furlong dirt sprint in 1:11.55 as the heavy post-time favorite. She has won her last four races by a combined 18 lengths.  She will remain at Sam Houston Race Park and compete in the Bara Lass on Texas Champions Day, according to her owner.

In a repeat of the Darby’s Daughter, Wink Texas and jockey Lindey Wade completed the exacta behind Star of the North, holding off third-place finisher Thatsalotofbling and Lane Luzzi by a neck.

The Texas Thoroughbred Association sponsors the Clarence Scharbauer Jr. Texas Stallion Stakes Series (TSSS), a set of races for progeny of nominated Texas-based stallions. The series features three sets of races, each split into two divisions (colts/geldings and fillies) for a purse of $75,000 per division. The race honors Two Altazano who won the Grade 1 Coaching Club American Oaks in 1994. The accomplished mare, owned by the late Harold V. Goodman, also captured the 1994 Sam Houston Oaks with Hall of Fame jockey Pat Day in the saddle.

Saturday night’s action continued with a field of 12 fillies and mares competing at one mile on the Connally Turf  Course in the $75,000 Miss Bluebonnet Turf Stakes.

Ima Discreet Lady had a very notable victory off the layoff for trainer Karl Broberg. The 5-year-old daughter of Discreet Cat was making her first start since September 12 at Remington Park. Broberg had tried to get a prep race for her prior to the Miss Bluebonnet, but several races were taken off the turf due to rain. It turned out that his talented mare was up to the task as topped a contentious field tonight with confidently handling by Ry Eikleberry. He guided her to the lead, covering the first quarter mile in :24.16 and the half-mile in :49.05. She got clear in the stretch and drew off by 4 ½ lengths in a final time of  1:38.04 over the firm turf course.

“To be honest, Karl doesn’t give me very many instructions,” said Eikleberry. “I read the form and knew that the four (Miss Perfecta) had speed. We dueled briefly, but my mare was up for the challenge and we played catch me if you can.”

Broberg is widely known for his claiming prowess, but  he joined forces with owners Raymond Todd White and Duane Coker in purchasing the daughter of Discreet Cat out of the Too Much Bling mare Ima Three Blinger for $38,000 in the 2018 TTA in Training 2-Year-old Sale. She had won seven career races prior to tonight’s victory, including the 2019 Bara Lass at Sam Houston Race Park.

“She ran big tonight,” said Broberg by telephone following the victory. “I trained her dam whose career was cut short due to a bowed tendon. I hoped this mare would have success and credit Todd and Duane for their support.”

Direct Dial Showed His Championship Form in the $75,000 H-Town Stakes

Some of the most durable Texas veterans had to take a backseat to William S. Farish’s homebred, Direct Dial  this evening in the $75,000 H-Town Stakes. The 2018 Texas Thoroughbred Association (TTA) Horse of the Year dominated his six rivals in the seven furlong main track feature under the meet’s leading rider, Stewart Elliott.

The son of Too Much Bling won the 2018 Jim’s Orbit here and has been a solid stakes at each of the Texas racetracks.

Elliott patiently guided the handsome roan 6-year-old horse behind the early leader and 37-1 longshot Gunnerselesticman, who covered the first quarter-mile in :22.85. He drew clear at the top of the stretch and closed for the victory in a final time of 1.23.76.

“He’s just a cool horse,” said Elliott. “I was confident the entire way and he made me feel that he was ready to go when I asked him.”

This was the ninth win from 25 career efforts for Direct Dial ($3.00) who topped the $400,000 earning mark tonight for his Hall of Fame conditioner.

“He is Texas,” stated Asmussen, who was at Oaklawn Park today and left the saddling duties to longtime assistant Pablo Ocampo. “He will return on Texas Champions Day.”

Gunnerselesticman held on for the runner-up spot with Ernesto Valdez-Jiminez in the saddle. Blackhorse Farm LLC’s Algebra, who had come off the pace to win his last two allowance races for trainer Danny Pish, ran third under jockey Lane Luzzi. Gold Pilot, He’s a Suitor, Trumps Revenge and Bubba Bling followed.

Moojab Jr Scores the Upset in the $75,000 Houston Turf Stakes

The second turf feature of Texas Champions Preview Night was the $75,000 Houston Turf Stakes, contested at a mile and one sixteenth on the Connally Turf Course. On paper and according to the betting public, it looked like another showdown between 2020 TTA Horse of the Year Redatory and morning line favorite Sunlit Song.

However, the victory went to Moojab Jr owned by John L. Pierce, who had previously tested the waters against the two favorites before running a huge race for jockey Iram Diego and trainer Paul Duhon.  The 7-year-old gelding by Moojab was unhurried in the early stages with Redatory and Kenai Bob dueling in fractions of :24.71 and :48.82. Moojab Jr was fourth as the field approached the final turn, with Sunlit Song appearing to have the best position. Diego guided his mount to the inside and he surged clear by a head in a final time of 1:44.77.

“It was a perfect trip,” said Diego. “Paul has done so well with this horse.”

The post-race interview was very entertaining when Pierce stepped up to the microphone!

“We claimed this horse,” Pierce explained. “Paul really liked him, but I didn’t want a horse this old. He had a history of bleeding, but once we found out why, we took care of him and Paul did a great job. I’ve probably fired him more than George Steinbrenner fired Billy Martin, but this win is really special!”

Duhon credited the turf excellence of Redatory and Sunlit Song.

“These are two great horses that we traded punches with, and we always got the worst of it,” said Duhon. “I just believed that if he got the right trip, we could turn things around.”

Moojab B rewarded his supporters with a win payout of $23.80 as he won his eighth career race from 34 starts. Sunlit Song ran second under Lindey Wade, followed by Kenai Bo and Redatory for his owner and breeder James Wessel. Mucho Dinero, Fando and John Dough completed the order of finish.

Trainer Bret Calhoun swept the exacta in the final stake of the Texas Preview Night card, led by Stone Cafe, a 3-year-old son of Stonesider who notched his first career stakes win in the $75,000 Jim’s Orbit.

The Texas-bred gelding is owned and bred by Douglas Scharbauer, out of Santacafe, by Early Flyer.

Jockey Lindey Wade and Stone Cafe ($7.00) stalked the pace early before making a five-wide move around the turn and swinging to the lead in the stretch to win by a length. The final time for the six-furlong sprint on the fast dirt track was 1:12.15.

“I was really confident tonight,” said Wade. “In the last stakes, Carbon Stryker got the jump on us.  I knew if I could leave running and put myself in a close position and with a little more distance, that we had a real good shot. It all worked out!”

Stone Cafe debuted at Lone Star and broke his maiden at Remington before coming to Sam Houston, where he finished second in his first career stakes race, the Mr. Dandy Division of the Texas Stallion Stakes for 3-year-olds in January.

Wade and Stone Cafe had to fend off late-closing stablemate Dust Em, who finished second with Ry Eikleberry aboard. Stewart Elliot and Island Sun held on for third place for trainer Steve Asmussen. Post-time favorite Carbon Stryker, who defeated Stone Cafe in the My Dandy Stakes in January, broke out at the start and finished fifth.

Calhoun has won three previous editions of the Jim’s Orbit, including last year’s race with Gold Pilot, who was honored as TTA Champion 3-Year-old Colt.

The Texas Thoroughbred Association sponsors the Clarence Scharbauer Jr. Texas Stallion Stakes Series (TSSS), a set of races for progeny of nominated Texas-based stallions. The series features three sets of races, each split into two divisions (colts/geldings and fillies) for a purse of $75,000 per division. In 2005, the Texas Thoroughbred Association named the colts and gelding division of the Texas Stallion Stakes for Jim’s Orbit, who won the Grade 2 Ohio Derby prior to competing in the 1988 Kentucky Derby.