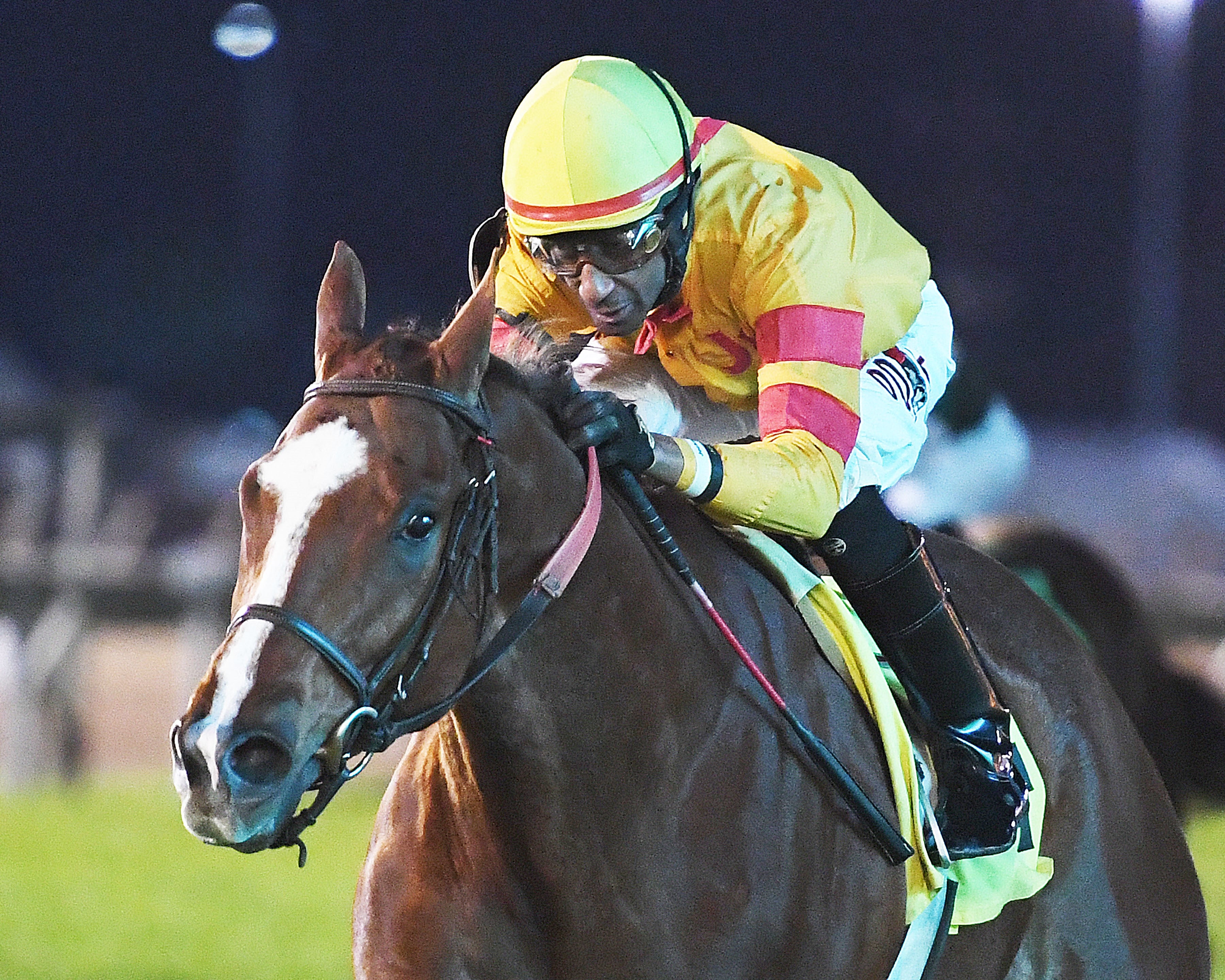 Jockey DeShawn Parker Wins Each of the Four Features

HOUSTON, TX- Sam Houston Race Park hosted the inaugural Texas Champions Preview Night on a cool, clear night. Exciting finishes were on display for the $75,000 Jim’s Orbit; $75,000 Two Altazano; $75,000 Houston Turf and $75,000 Miss Houston Turf. It was a huge night for two-time leading Sam Houston Race Park jockey DeShawn Parker, who won each of the four stakes on the card!

Texas Belle Returns to the Winner’s Circle in the $75,000 Miss Houston Turf Stakes

Saturday night’s action got underway with a field of 10 fillies and mares competing at one mile on the Connally Turf Course in the $75,000 Miss Houston Turf Stakes.

Richard Chandler’s Texas Belle proved her affinity for the Sam Houston turf when she rallied past her rivals under confident handling by Parker. The 8-year-old mare by Angliana was making her 42nd career start and 12th at Sam Houston for trainer Mindy Willis.  Parker got her settled from off the pace, tracking the leaders, as they covered the first quarter in :23.06 and the half-mile in :47.14. She got clear in the stretch and powered to the wire in 1:37.15 over the firm turf course.

“She eased into the race and was so comfortable and very relaxed,” said the veteran rider. “Once I got her clear, she just took off.”

Trainer Mindy Willis reflected on how much Texas Belle meant to her.

“She’s been so good to us,” commented Willis. “I figured she would run a good race tonight. In the Jersey Lilly (on January 26), she hadn’t run since Remington Park, so she needed that race and there were some tough fillies in there. We will run her one more time (on Texas Champions Day), which will be her last hurrah. Then she will become a mom!”

She’s Pretty Lucky rallied for second under Lindey Wade, followed by the early pacesetter Zarelda and Too Much Irish.

Maiden Breaking Score for Dust a Flying in the $75,000 Two Altazano

Trainer Bret Calhoun has won the last five editions of the six-furlong $75,000 Two Altazano for accredited Texas-bred fillies. Tonight, he made it six in a row when entered Dust A Flying got up in the final strides under Parker. The daughter of Early Flyer is owned by Wayne Sanders and Larry Hirsch, who have been longtime supporters of Texas racing. She had run second or third in each of her four previous starts but showed a newfound confidence this evening.

“It was a nice way to break the maiden,” said Calhoun in a telephone interview following the race. “We had been pointing her to this race and really ran well for DeShawn.

Despite drawing the rail, Parker found a way to get her clear and at one point, four fillies were striding in unison across the track. With one final surge, she was able to clear It’s My Money by ¾ of a length. Final time, over a fast track, was 1:12.19.

“They were all running pretty hard,” said Parker. “I didn’t know how it would finish, but she gave me one last punch at the wire.”

It’s My Money completed the exacta under Ernesto Valdez-Jiminez with Tell Me You Love Me finishing third. Brightest, a daughter of leading Texas stallion Too Much Bling, completed the superfecta for trainer Steve Asmussen, but his other entrant, Stillatune, became fractious in the saddling paddock and was scratched from the race.

Dust a Flying, sent off as the third choice in the wagering, paid $6.80 for the win. She will return on Texas Champions Day, according to Calhoun.

Dominant Score by Redatory in the $75,000 Houston Turf Stakes

The second turf feature of Texas Champions Preview Night was the $75,000 Houston Turf Stakes. Texas Thoroughbred Association’s top 2-year-old in 2017, demonstrated his class as he topped eight rivals in the mile and one-sixteenth stakes.

Owned and bred by James Wessel, Redatory has considerable success on the grass and won the 2019 Richard King Stakes on Texas Champions Day at odds of 32-1. The price was considerably less tonight as Parker guided the 5-year-old son of Oratory to a 4 ¼ length victory in 1:44.68.  Again, it was a very well-timed ride by Parker, with fractions of :24.81; :50.29 and 1:14.32 heading into the final stretch. Sent off as the post-time favorite, Redatory paid $3.80 for the win.

This was the sixth win from 18 lifetime starts for the chestnut gelding trained by former jockey, Allen Dupuy

“The race set up good for him,” said Dupuy. “I always thought he would be a good turf course by the way he travels. He’ll be back on Texas Champions Day.”

Wessel had a little fun in the winner’s circle when asked how the ride by Parker compared to that of Dupuy.

“It was so long ago, I can’t remember,” quipped Wessel. “But I would really like to thank Allen and (his wife) Sonja for taking such good care of the horse, and also Michael Grossman for bringing such nice stallions to Texas.”

Roy W. Cobb’s homebred Mr Money Bags,  installed as the 2-1 morning line favorite, was injured in a work on February 15 and was scratched from the race. The son of Silver City has won eight of his 11 career efforts and has never competed on the turf. Trained by Mike Neatherlin, the talented gray will be honored as Texas Thoroughbred Association Horse of the Year on March 22.

A field of seven colts and geldings will run six furlongs in the final feature on the card. The $75,000 Jim’s Orbit with a solid group of stakes tested runners and several Texas-breds stepping up for the first time.

Trainer Bret Calhoun had two runners in the field, and DeShawn Parker got his fourth stakes win of the night on Gold Pilot. The son of My Golden Song is owned by Wayne Sanders and Larry Hirsch and prepped for this with a nice maiden win over a sloppy track here last month.

“He handled the off going very well and we felt he was coming around,” said Calhoun.

As for Parker, 49, he admitted that he had never won four stakes on a card in his highly successful career which began in 1988. The win aboard Gold Pilot was number 5,693.

“This is my first ever time winning four stakes and trust me, it feels great,” said Parker. “I definitely want to thank my agent, Bobby Kelly; he does a great job. I appreciate all the trainers and owners as well.”

Gold Pilot ($8.60) crossed the wire in 1:10.33 with Good Judgement under David Cabrera, second by a margin of 2 ¾ lengths. Bubba Bling was third with Wonders of Hislove completing the superfecta.

In 2005, the Texas Thoroughbred Association named the colts and gelding division of the Texas Stallion Stakes for Jim’s Orbit, who won the Grade 2 Ohio Derby and started in the 1988 Kentucky Derby. The fillies division is a tribute to Two Altazano, winner of the Grade 1 Coaching Club American Oaks in 1994. The accomplished mare, owned by the late Harold V. Goodman, also captured the 1994 Sam Houston Oaks with Hall of Fame jockey Pat Day in the saddle.