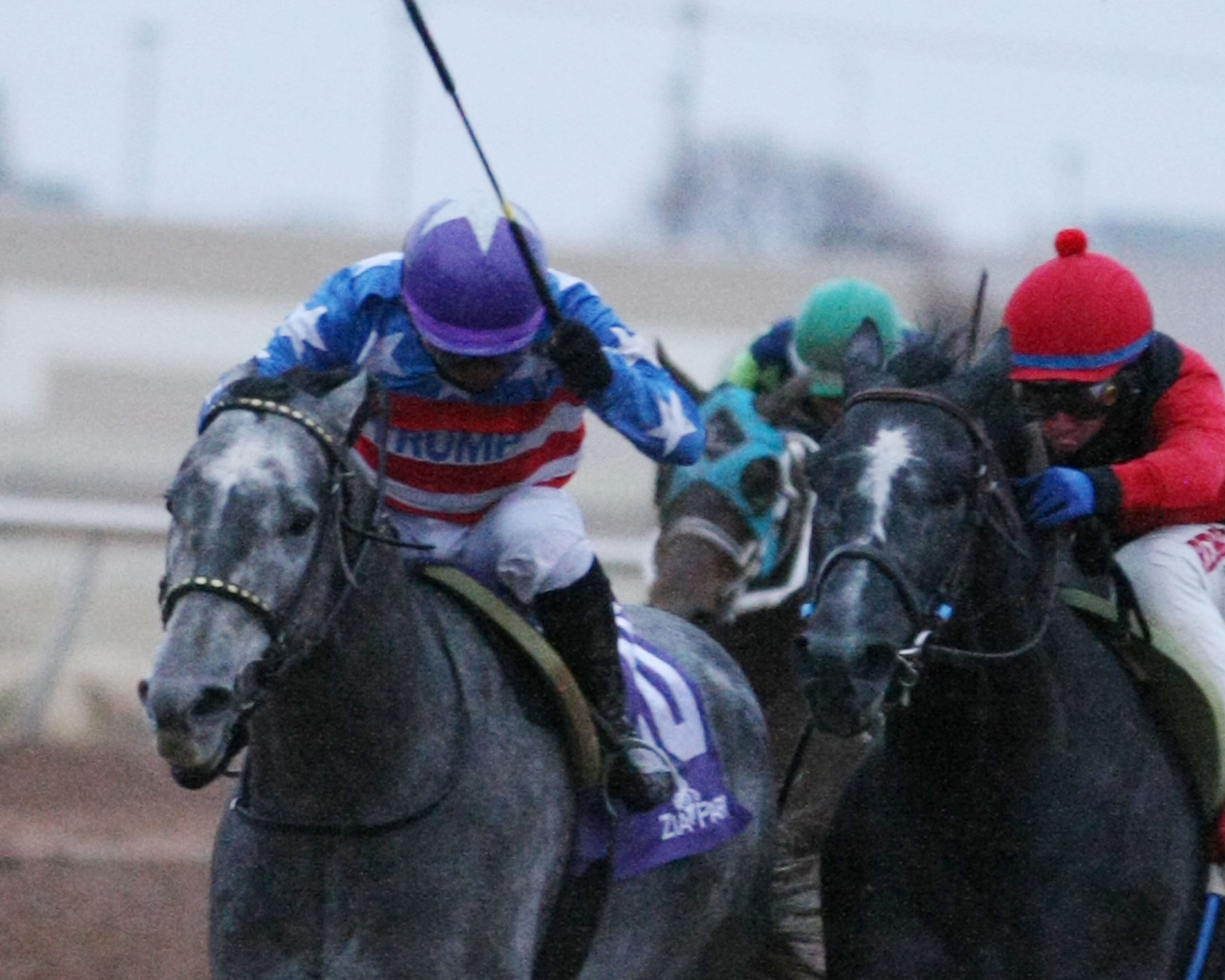 Hobbs, NM (November 27, 2019) - Zia Park presented its seventh annual Land of Enchantment Day program Wednesday, November 27. Despite the loss of multiple stakes entrants due to the shipping restrictions of horses from Remington Park due to reported cases of equine herpesvirus (EHV-1) and less than stellar weather conditions, there were some outstanding performances in the seven stakes on the pre-Thanksgiving Day card.

Roy Cobb’s Mr Money Bags won the biggest race of his career today at Zia Park as he dug in and captured the $250,000 Zia Park Derby.  Trained by Mike Neatherlin, the Triple Crown nominated son of Silver City, ridden by Ernesto Valdez-Jiminez was able to hold off a determined bid by Dueling to win the mile and one-sixteenth main track event, by a margin of a neck in 1:44.04 over a good track

The tenacious Texas-bred broke his maiden at Zia Park one year ago. He won two stakes earlier this year at Sam Houston Race Park, before returning to Hobbs to win the $50,00 Roadrunner Stakes here last month. Neatherlin opted to keep him here and thanked trainer Casey Lambert for overseeing his stay prior to this race.

"I've had some good horses, but this horse is unique," admitted Neatherlin.  "Every time I think the situation might be a little tough for him, he just comes through. He amazes me a lot and he has a bigger future ahead."

"He's an amazing horse," added Valdez-Jiminez. "He will do anything you want. He's a speed horse, but is pretty smart! I want to say thank you to Mike and Casey Lambert."

Dueling, a Kentucky-bred colt owned by Michael C. Stinson, ran a game second for trainer Jerry Hollendorfer. The son of Violence made his last start in the Let it Ride Stakes at Del Mar.  Walker Stalker, Final Jeopardy and Sherriff Brown completed the order of finish.  Drawn as a ten-horse field, Tone Broke, Sleepy Eyes Todd and Bankit were among the nine horses unable to ship from Remington Park. Proverb and Hustle Up were also scratched.

Mr Money Bags returned $3.80 for the win. He improved his career record to 7 wins from ten starts. With today’s winner’s check in the amount of $150,000, he has earned $345,270.  He is expected to be honored as 2019 Texas Thoroughbred Horse of the Year. Neatherlin said he would make his next start in the 2020 Sam Houston Race Park meet, which begins on January 10.