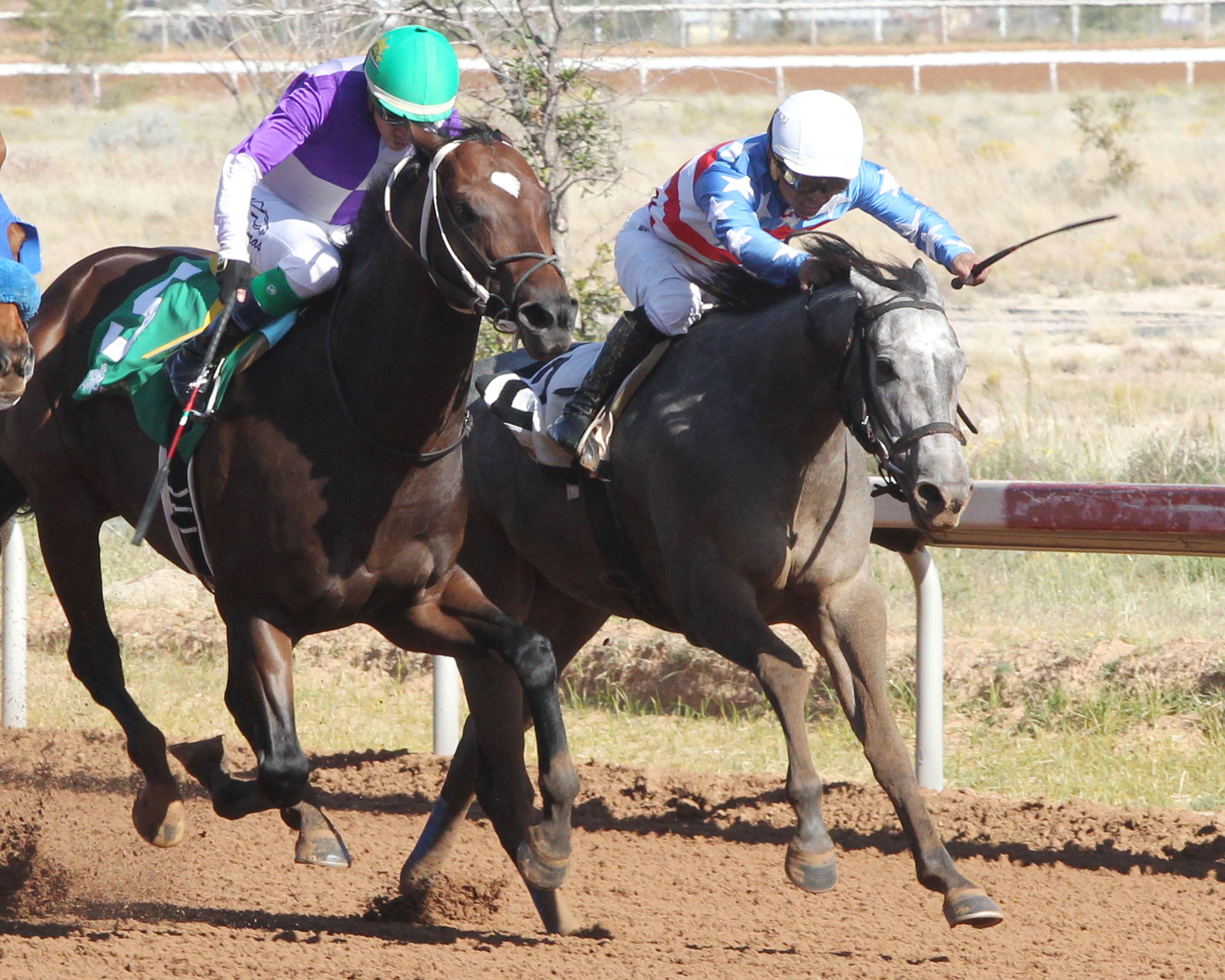 The draw for Land of Enchantment Day took place on Tuesday, November 19 with full fields assembled for the majority of the ten-race card. Several of the stakes entrants recently competed at, or are stabled  at Remington Park in Oklahoma City, and were scheduled to ship to Zia Park prior to November 27.  However, due to reported cases of equine herpesvirus (EHV-1) at Remington Park, the New Mexico Racing Commission quickly ruled that no horses from Remington Park would be able to ship to Zia Park to compete.

“Obviously, this is a disappointing development for the richest day of our 2019 live racing season,” said Mike Shamburg, Zia Park’s Racing Secretary. “However, we still have some quality shippers and local horses that should put on a good performance for Land of Enchantment card.”

The seven stakes on the Land of Enchantment program are as follows:

The $100,000 Zia Park Distaff for fillies and mares, three-years old and upward at six furlongs kicks off the stakes action as the third race on the card.

Former jockey Casey Lambert trains a very talented filly entered in the Distaff. Tom R. Durant’s homebred Cashcheckorcharge has a four-race win streak coming into the race, including her most recent score in the $50,000 Chaves County Stakes here on October 28.

The daughter of  Will Take Charge has been ridden in each of her five career starts by jockey Isiaias Enriquez. He will guide the chestnut filly from the rail at odds of 5-2.

Mt. Brave, who was installed as the 8-5 morning line choice, is currently stabled at Remington Park for Asmussen, and will be scratched.

Trainer Justin Evans, who is currently the leading trainer at Zia Park, will saddle two entrants in the Distaff.  Award It, a 6-year-old mare by Tapit will make her 36th career start for owner Stan Monro. She has won six races this year and will be ridden by Luis Negron. Todd and Shawn Hansen’s Best of Me exits an eighth-place finish in the Chaves County Stakes, which was her first start at Zia. The 4-year-old daughter of Super Saver won the Washington State Legislators Stakes at Emerald Downs in June.

It will be a busy day for trainer Evans who has two runners entered in the six furlong $100,000 Zia Park Sprint.

Pendleton, owned by Bill and Susan Tomasic, has won seven of his 12 lifetime starts and $205,924 to date. The 5-year-old son of Giant’s Causeway exits a third-place finish in the $200,000 Downs of Albuquerque Stakes on August 3. Evans will give a leg up to rider Luis Contreras.

“He was in the lead in his last start, but did not like the off track,” acknowledged Evans. “But he’s coming into this race in very good form. He’s always been a great work horse and Luis fits him very well.”

Evans will also send out the Kentucky-bred Black Ops, who is owned by John Pinkerton.  Sired by Hard Spun, Black Ops was a gate-to-wire winner in the $55,000 Budweiser Special Handicap at the Downs of Albuquerque on September 21. Luis Negron has the call.

Chief Cicatriz, bred and owned by Roy Gene Evans, will break from post position two as the 8-5 morning line favorite. The 6-year-old son of Munnings is undefeated in his three starts at Zia Park and will be ridden by Tyler Baze.  He exits a victory in the $30,000 Luke Kruytbosch Stakes at Turf Paradise on November 9.

The Zia Park Sprint is set for the fifth race on the card with an approximate post time of  1:48 pm.

The $75,000 Zia Park Juvenile for 2-year-old colts and geldings follows as the sixth race of the afternoon.  The stakes will go without the 3-2 morning line favorite, Bubba Bling, who is stabled at Remington Park in the Asmussen barn.

Conditioner Todd Fincher, who currently trails Evans by two wins in the trainer standings, looks for a good effort from Competitive Idea.  This will be just the second start for the gelding by Competitive Edge, owned and bred by J. Kirk and Judy Robison. He broke his maiden in his debut on November 4, drawing off to a seven-length victory under Ry Eikleberry, who has the return call in the six-furlong sprint.

“He’s the best 2-year-old in my barn,” said Fincher.  “Since day one, he’s done everything well and been a total professional. We are stepping him up right off the maiden win, but he had plenty left after that race and deserves a chance.”

The field also includes Party Town, who will ship in from California for trainer Val Brinkerhoff. This will be the first main track start for the colt by Shackleford, who won a $50,000  turf maiden special weight at Santa Anita on October 10 and ran on the turf at Del Mar two weeks ago. Tyler Baze will pilot the Kentucky-bred  for owner Bob Grayson, Jr.

Teed Off Stable LLC’s Jurisdiction also merits consideration in the Juvenile. Trained by Weston L. Martin, the son of Commissioner was impressive in his Zia Park debut on October 1, drawing off by five lengths under rider Roimes Chirinos, who retains the mount.

The $75,000 Zia Park Princess will showcase 2-year-old fillies and drew a field of nine. Wasabi Princess trained by Steve Asmussen, has been stabled at Zia Park since her maiden breaking victory at Churchill Downs on September 21. The daughter of Shanghai Bobby is owned by Winchell Thoroughbreds LLC and Allen Creel. Ricardo Santana, Jr. will ride the 7-5 morning-line choice.

Pish trains the Texas-bred filly by Race Day. Gee She Sparkles broke her maiden at Lone Star Park on June 15 and returned one month later to win the $109,167 Texas Thoroughbred Futurity. She defeated nine rivals by over five lengths and impressed her Texas-based conditioner.

“She’s kind of self-explanatory,” said Pish. “Like you see on paper, she’s undefeated and in both races she relaxed, closed and then opened up.”

This will be the first start since July 14 for Gee She Sparkles, but the filly has been “training forwardly” at Retama Park, according to Pish, and will ship to Hobbs on Monday.

Midnight Emma, owned and trained by Jose Luna Silva, has won two of her three career efforts including the $45,000 ATBA Fall Sales Futurity at Turf Paradise.  The filly by Midnight Lute, will be ridden by current Zia Park leading jockey Francisco Arrieta. Evans will saddle Showmethmagic, who is in pursuit of her third consecutive victory and first stakes win. The daughter of Power Broker is owned by Evan’s wife, Vanessa and Ken Tevelde. She will break from the rail under rider Luis Negron.

Distance specialists will get their opportunity to shine in the mile and one-eighth $150,000 Zia Park Championship.

Restrainedvenegence owned by Kelly Brinkerhoff and Bob Grayson, Jr., returns to Zia Park for trainer Val Brinkerhoff. The 4-year-old by Hold Me Back won the $65,600 Rolling Green Stakes on Labor Day weekend  at Golden Gate Fields. He followed that with a second-place finish in the Grade 2, $202,106 City of Hope Mile at Santa Anita. Tyler Baze will guide the dark bay gelding from post position five as the 3-1 morning-line favorite.

“It’s a family affair, for sure,” said Evans. “This horse was ultra-impressive in his Veterans Stakes win (on October 28). That was his biggest career Beyer and he continues to impress me with his versatility. The distances should be no problem and Miguel fits him really well.”

Sky Promise, who ran in the 2018  Zia Park Derby for trainer Robertino Diodoro, drew the far outside post and will be ridden by Francisco Arrieta. The Sky Mesa colt is the high earner in the field with $350,589 banked in 24 lifetime starts.

Two entrants will not be able to ship in for the Championships due to the aforementioned policy regarding horses at Remington Park. Lookin at Lee, trained by Asmussen and Net Gain, from the barn of Clinton Stuart, will be scratched.

The Zia Park Championship will run as the ninth race on the Land of Enchantment program.

A compact, but potent field of five fillies will go postward in the $250,000 Zia Park Oaks at the distance of one mile and one-sixteenths.

Lady Apple,  a multiple-graded stakes winning filly by Curlin was installed as the 3-5 morning line favorite but will not run due to the restrictions on Remington Park based-horses.

Two fillies from the barn of California-based horseman Richard Baltas are expected to ship to Zia Park.  Horologist defeated 2018 two-year-old champion Jaywalk in the Grade 3 Monmouth Oaks in August before finishing third  in the Grade 1 Cotillion at Parx and most recently competed in the Grade 2 Lexus Raven Run at Keeneland.  Tyler Baze has the call aboard the daughter of Gemologist who is owned by the ownership group of There's A Chance Stable, Parkland Thoroughbreds, Medallion Racing and Abbondanza Racing, LLC.

Horologist was previously trained by John Mazza up through the Cotillion.

“The race at Keeneland was my first time to run her,” said Baltas. “We brought her back to California; she’s has put on some weight and she breezed on Wednesday.”

Motion Emotion, a WinStar Farm LLC homebred, ran in the Grade 1, Kentucky Oaks at Churchill Downs and returned to action in the Beverly Lewis Stakes at Los Alamitos on September 7.

“She been breezing really well,” added Baltas.  “Mario (Gutierrez) has ridden at Zia before; I like her chances.”

Calf Moon Bay, who last ran third in the Grade 2 Las Virgenes at Santa Anita in February for trainer Jerry Hollendorfer is also entered.  Two longshots round out the field - Glacier Point, a turf allowance winner at Louisiana Downs and McWend,  winner of the New Mexico Breeder Oaks at Sunland Park earlier this year.

The $250,000 Zia Park Derby will run without two of its major headliners,  L and N Racing's Tone Broke and Bankit, owned by Winchell Thoroughbreds LLC and Willis Horton Racing LLC. They were among the nine horses unable to ship from Remington Park.

Roy Cobb’s Mr Money Bags, who won back-to-back stakes earlier this year at Sam Houston Race Park before testing the waters in graded stakes company. The Triple Crown nominated son of Silver City, who is conditioned by Mike Neatherlin, broke his maiden at Zia Park one year ago. He won the $50,00 Roadrunner Stakes here last month and boasts a career record of six wins from nine starts.   His regular pilot, Ernesto Valdez-Jiminez, has the call.

“This horse does his best running when he can get the lead,” said Neatherlin. “I kept him out at Zia in Casey Lambert’s barn after the Roadrunner and he has been training well.  He and Ernesto get along well; I think he’s set to run his best race.”

Dueling, a Kentucky-bred colt owned by Michael C. Stinson, ran sixth in the 2018 Grade 1 Breeders’ Cup Juvenile for trainer Jerry Hollendorfer. The son of Violence made his last start in the Let it Ride Stakes at Del Mar.

Trainer Todd Fincher is hoping for a good effort from Sheriff Brown, who is owned and bred by Joe Peacock. He closed for second in the $106,000  Riley Allison Derby last January at Sunland Park under rider Ry Eikleberry, who will be back aboard on Wednesday.

“He’s by Curlin, so the further the better for him,” said Fincher.

The Zia Park Derby will be run as the tenth and final race on the card with an approximate post time of 4:13 pm. (M.T.)

In response to the equine herpesvirus (EHV-1) outbreak at Remington Park, in addition to a ban on horses coming directly from that racetrack, Zia Park has also instituted additional requirements on horses shipping on to the grounds.   Horsemen are encouraged to contact the racing office at Zia Park prior to shipping any horses.

Racing publicist Martha Claussen will join track announcer John McGary for a pre-race handicapping television preview of the entire Land of Enchantment card  at 11:00 am. They will offer their analysis of each of the races on the program.