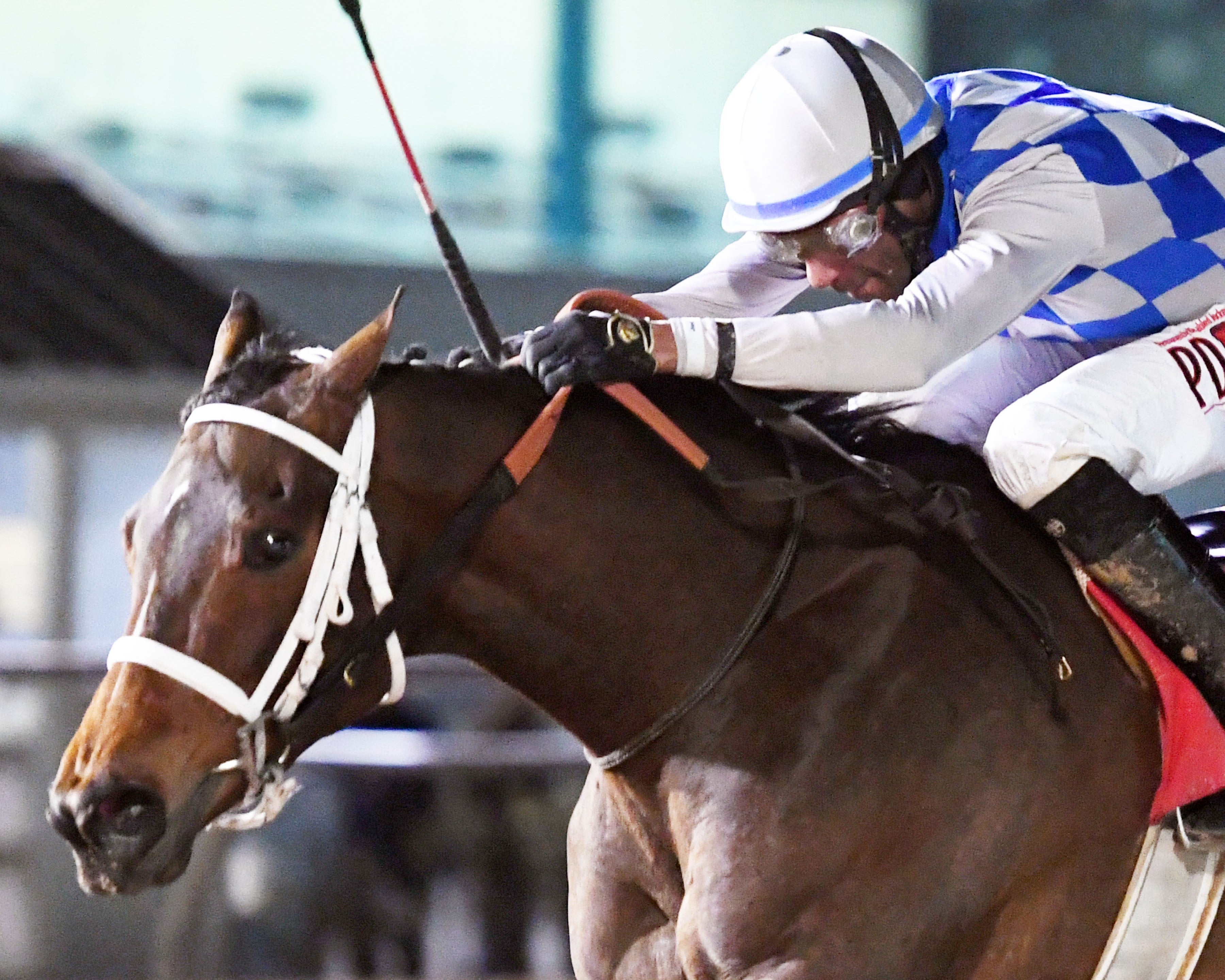 The Event Will Run Spectator Free, But Will be Streamed Live

Saturday night’s action begins with a field of seven accredited Texas-breds in the one mile $75,000 Star of Texas. Gene Burkholder’s He’s So Zazzy, a 7-year-old son of Oratory, returns to Sam Houston for the first time since running second in the 2019 Spirit of Texas Stakes. Trained by William Martin, He’s So Zazzy is the high earner in the field with $228,786 banked in 34 starts. He was claimed for $15,000 last June at Prairie Meadows and will break from the rail under jockey Lane Luzzi as the 9-5 favorite.

Mike Powers Gold Buyer will transition from turf to the main track under ride Danny Sorenson. Sired by My Golden Song, he last competed in the $75,000 Houston Turf Stakes on February 22 for trainer Tracy Norris and has posted two bullet works in preparation for this start. Two other noteworthy runners include Kats Second Silver for owner Karl Roush and M and M Racing’s Lethal Move. Both are conditioned by Karl Broberg.

The Star of Texas is carded as the third race of the evening with an approximate post time of 7:40 pm (CT) and will be followed by the next six features.

Gold Pilot Seeks Second Stakes Victory of the Meet in the $75,000 Groovy Stakes

A field of six colts and geldings will run six furlongs in the $75,000 Groovy Stakes with Jim’s Orbit winner Gold Pilot installed at odds of 2-1

Trainer Bret Calhoun gave the return call to DeShawn Parker aboard the son of My Golden Song owned by Wayne Sanders and Larry Hirsch. The popular veteran jockey swept each of the of the four Texas Champions Preview stakes last month. Trainer Bret Calhoun was pleased that Gold Pilot handled the off track so well on February 22 and looks for a good effort by the gray Texas-bred, who will be gunning for his third consecutive win.

“He’s a horse we have always liked,” said Calhoun. “It’s good that he was comfortable on an off track, but whether he gets that on Saturday, I am pleased that the lights have come on for him.”

Calhoun also sends He’s a Suitor, a homebred son of Hat Trick (JPN) for Collingsworth Thoroughbreds Racing LLC. He will make his stakes debut off an impressive seven-length allowance win at Sam Houston Race Park on February 5. Jockey Lindey Wade has the call.

“He ran well last month, and we felt this was a good step up for him,” added Calhoun. “At some point, we would like to try him going long on the turf.”

As for Parker, the 49-year-old rider admitted that he had never won four stakes on a card in his highly successful career, which began in 1988. He recently notched his 5,700th lifetime win.

“This was my first ever time winning four stakes and trust me, it felt great,” said Parker. “I definitely want to thank my agent, Bobby Kelly; he does a great job. I appreciate all the trainers and owners as well.”

A field of ten accredited Texas-bred fillies will compete at the distance of six furlongs in the $75,000 Bara Lass.  Dust A Flying, winner of last month’s $75,000 Two Altazano, will break from post position four under DeShawn Parker. The daughter of Early Flyer is owned by Wayne Sanders and Larry Hirsch and broke her maiden in the Two Altazano after several runner-up finishes.

“She has made steady progress, and of course, we were happy to see her get her first stakes win,” said Calhoun. “This is a lot tougher field, but she’s on the improve and we have confidence in DeShawn.”

It’s My Money, the runner-up in the Two Altazano for trainer George Bryant, is also in the field. Owned by Don Leach III and Andrew Moran, the filly also sired by Early Flyer is a stakes winner at both Retama Park and Lone Star Park. Jockey Ernesto Valdez-Jiminez will be back aboard.

Bryant will also saddle HDT Allied Management LLC’s Tell Me You Love Me, who ran third in the Two Altazano.

Trainer Steve Asmussen will test Dancin All Alone, who makes her stakes debut off a solid maiden-breaking score here on January 18. The daughter of Congrats is owned by Phoenix Thoroughbred III Ltd and will be ridden by Richard Eramia.

A contentious field of seven turf specialists will compete in the $75,000 Richard King Stakes for 4-year-olds and upward at a mile and one-eighth on the Connally Turf Course.

Redatory, owned and bred by James Wessel, is the 8-5 morning line choice and will be seeking his fifth turf stakes win on Saturday night. Trained by retired jockey Allen Dupuy, the 5-year-old son of Oratory won the  $75,000 Houston Turf Stakes here last month under DeShawn Parker, who will guide the chestnut gelding in the Richard King.

“He’s ready,” stated Dupuy. “No problems since the last race.  Mindy’s horse (Sunlit Song) will probably go to the lead and “Red” will run his usual race. The only difference is that Mr. Wessel will be watching it on the live feed.”

Cowboy Bling outran his 17-1 odds to run second to Redatory and returns for trainer Danny Pish and rider Lane Luzzi. The field also includes Sunlit Song, who completed the trifecta in the Houston Turf for trainer Mindy Willis and Alvin Wong’s Bonjour Baby, who was the runner-up to Redatory in the 2019 Richard King.

Direct Dial Takes on Nine Rivals in the $75,000 Spirit of Texas

A field of ten colts and geldings will enter the starting gate for the six furlong $50,000 Spirit of Texas Stakes. Several of the most accomplished Texas-breds sprinter will make this one of the most competitive features on the card.

Will S. Farish’s homebred Direct Dial, who won last year’s edition of this race, will break from post position five under Richard Eramia as the 2-1 favorite.  Conditioned by Hall of Famer Steve Asmussen, the 5-year-old son of leading Texas stallion Too Much Bling, is a multiple-stakes winner and was honored as 2018 Texas Thoroughbred Association (TTA) Horse of the Year.

He will face 2018 Spirit of Texas champion Imma Bling, who makes his return to Sam Houston Race Park for trainer Karl Broberg. Also sired by Too Much Bling, the gray sprinter has won ten of his 49 career starts and last competed here in the $100,000 Frontier Utilities Sprint on January 26.

“I claimed him for $50,000 at Oaklawn Park with this race in mind,” explained Broberg, who has tabbed David Cabrera to ride Imma Bling.

The “Bling” brigade also includes Rumpole, who won the 2017 Groovy Stakes for trainer Robert Young and Sugar Footin Bling, who will break from the far outside post under jockey Iram Diego.

Sweet Finale On Tap for Texas Belle in the $75,000 San Jacinto Stakes

The second turf feature of the evening is the $75,000 San Jacinto Stakes for fillies and mares. It will be contested on the Connally Turf Course at the distance of a mile and one-sixteenth.

Trainer Mindy Willis will be understandably emotional as she saddles Richard P. Chandler’s Texas Belle. It will be the final race for the 8-year-old daughter of Angliana, who will begin her second career as a broodmare.

DeShawn Parker, who guided her to victory in the $75,000 Miss Houston Turf one month ago, has the mount. The talented mare has banked $226,544 in 42 starts; the win on Saturday would be the 12th of her career.

“She’s been so good to us,” stated Willis. “I will be an emotional wreck if she wins because she is so special and Mr. Chandler has been such a great owner. All I can hope for is that I will still be around to train her babies in the future!”

Texas Belle will have to fend off several other of her rivals in the Miss Houston Turf, including She’s Pretty Lucky trained by Eddie Keneally. She will be ridden by David Cabrera. Zarelda, who completed the trifecta, will also return as will Coraluna, Too Much Irish and Brazos Angel.

Defending Champion Shes Our Fastest Returns in the $75,000 Yellow Rose

Shes Our Fastest, owned by Mark Norman and Norman Stables Inc. will make her third start at Sam Houston Race Park as the 6-5 morning line favorite. The 5-year-old daughter of Oratory is trained by Scott Gelner and will be ridden by Iram Diego. The Yellow Rose defending champion followed that with a victory in the $65,000 Texas Stallion Stakes last May at Lone Star Park. She won the $70,600 Owner Appreciation Distaff on February 28 at Delta Downs, which was her most recent start.

“She’s doing well, and we are looking forward to returning to Sam Houston,” said Gelner.

“I love the way she is coming around,” said Broberg.

In addition, Peter Varga’s Brave Daisey, who had been running at Remington Park, will break from post position five under Devon Magnon. The 5-year-old daughter of Hidden Blessing won the 2018 Valor Farm Stakes at Lone Star Park.

“We look forward to presenting an excellent edition of Texas Champions Day,” said Frank Hopf, Sam Houston Race Park’s Senior Director of Racing. “Despite the necessary attendance restrictions due to COVID-19, we appreciate the cooperation of the owners and of course, our fans during this time. All of our races will be streamed live via our website, www.shrp.com.”