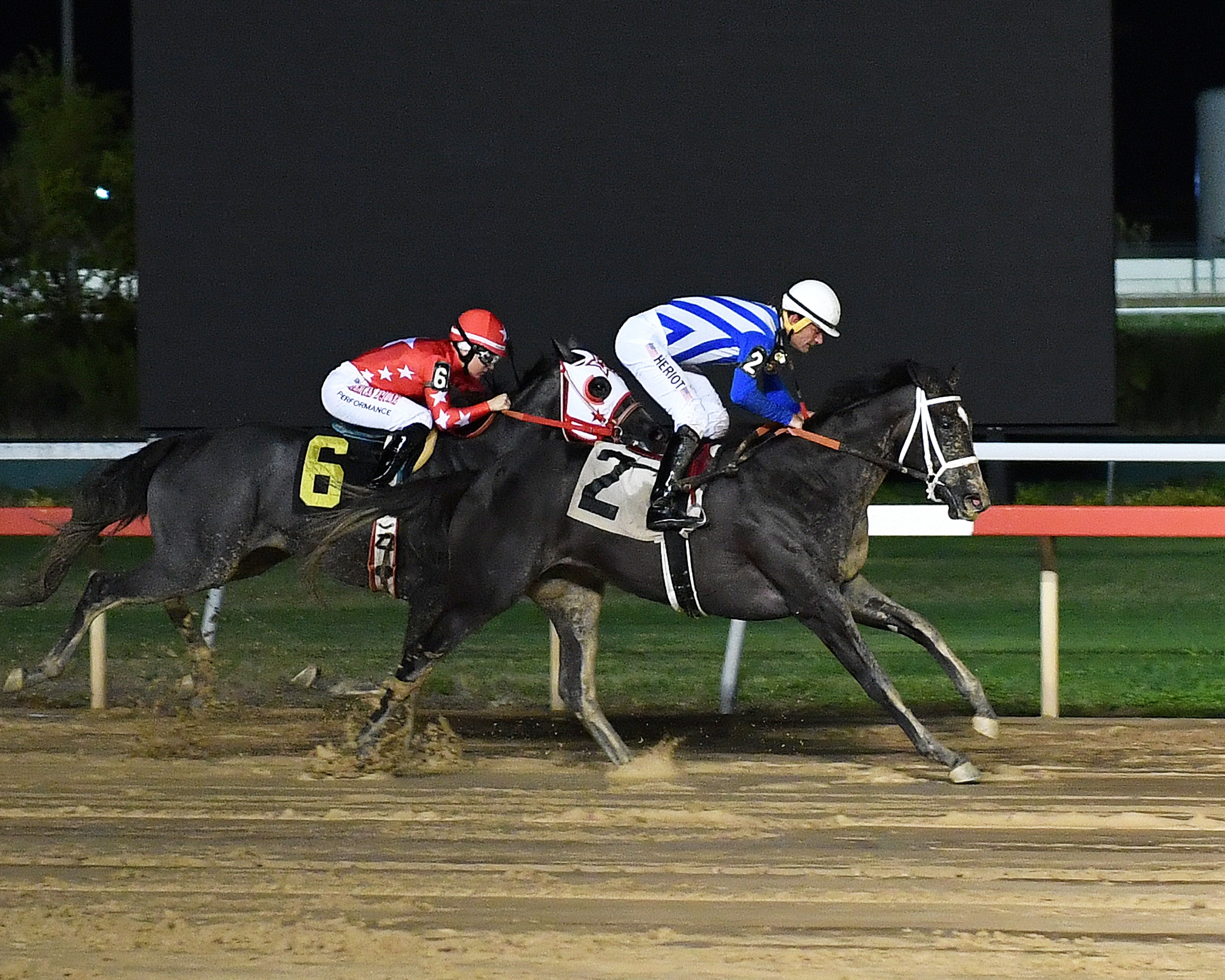 (Houston, TX) – Thoroughbred stakes action continues at Sam Houston Race Park on Saturday, February 23. The nine-race card, which gets underway at 7:15 pm (Central), will include the running of the $65,000 Jim’s Orbit and $65,000 Two Altazano for accredited Texas-breds.

In 2005, the Texas Thoroughbred Association renamed both these stakes to honor a famous Texas Thoroughbred.  The colts and gelding division at Sam Houston Race Park was named for Jim’s Orbit, who won the Grade 2 Ohio Derby and started in the 1988 Kentucky Derby. The filly division is a tribute to Two Altazano, winner of the Grade 1 Coaching Club American Oaks in 1994. The accomplished mare, owned by the late Harold V. Goodman, also captured the 1994 Sam Houston Oaks with Hall of Fame jockey Pat Day in the saddle.

A field of seven colts and geldings will run six furlongs in the $65,000 Jim’s Orbit with a mix of stakes tested runners and several Texas-breds stepping up for the first time.

Roy W. Cobb’s homebred Mr Money Bags will break from the rail as the 4-5 morning line favorite. This will be the fourth career start for the son of Silver City who broke his maiden impressively last November at Zia Park. He advanced directly into stakes company, running third in the $75,000 Big Drama at Delta Downs on January 5. Three weeks later, he returned to action, drawing off by over five lengths in a $50,000 optional allowance sprint at Delta Downs. Trainer Mike Neatherlin has regard for Mr Money Bags, and confirmed that he is Triple Crown nominated.

“He’s a Texas-bred, but we really like him and are hoping to run him in the Sunland Derby,” said Neatherlin. “I judge my horses by the strength of the gallop out, and this horse always impresses me in that regard. We’ll take the blinkers off on Saturday night; I used them at Delta when he ran under the lights, but he’s run twice at night.”

Trainer Bret Calhoun has three entrants from three different sires, including Douglas Scharbauer’s homebred Gold Buyer, who just missed here two weeks ago. DeShawn Parker has the return call on the son of My Golden Song.

Truly Bling and Mucho Dinero are both owned by Wayne Sanders and  Larry Hirsch. Truly Bling, a gelded son of Too Much Bling, makes his first start in stakes company under Sasha Risenhoover. Mucho Dinero ran second in the El Joven Stakes at Retama Park before stepping up in the $100,000 Clever Trevor at Remington Park on November 2. Lindey Wade has been tabbed to ride the son of Early Flyer.

“They are all coming into this race off different paths," said Calhoun. "The recent win here (on January 27) for Truly Bling was a nice confidence builder. Gold Buyer shortens up from a mile and has always shown talent and Mucho Dinero ran pretty hard as a 2-year-old. He’s stakes-tested and is doing well."

Trainer Steve Asmussen will run Roundaboutation, a son of Littleexpectations, bred by his father, Keith. This will be just the third start for the chestnut gelding, co-owned by

Erv Woolsey and Keith Asmussen. He prepped for the Jim’s Orbit with a second-place finish to Truly Bling here on January 27. Jockey Iram Diego has the return call.

Lullaby Bling and My Bling, two other offspring of leading Texas stallion Too Much Bling, will also complete in the Jim’s Orbit. Danele Durham trains Lullaby Bling, who is seeking his second win since breaking his maiden last June at Lone Star Park. My Bling won the Texas Stallion Stakes on November 15 at Retama Park and exits a fifth-place finish in the $75,000 Kip Deville Stakes at Remington Park for trainer George Bryant.

The Jim’s Orbit will run as race four, with an approximate post time of 8:45 pm (Central).

Cowgirls Like Us Faces Seven Fillies in the $65,000 Two Altazano

Douglas Scharbauer’s homebred Cowgirls Like Us has been installed as the heavy favorite, at odds of 2-5, in the second feature of the evening, the $65,000 Two Altazano.

The daughter of My Golden Song was foaled in Kentucky and has competed in five career stakes races, winning both the Texas Stallion Stakes and the La Senorita at Retama Park.

“As a 2-year-old, she needed time to develop; then she won three in a row at Retama,” stated Calhoun. “We stepped her up and ran her in the ($150,000) Silverbulletday at Fair Grounds, but she  stumbled badly at the start. I kept her at Fair Grounds and she’s been training well.”

DeShawn Parker will ride the gray filly, who is the top money-earner in the field with $154,185 banked in seven lifetime starts.

This would be the third consecutive victory in the Two Altazano for Calhoun, who won it last year with Scharbauer’s homebred Howboutthiscowgirl, a full sister to Cowgirls Like Us and in 2017 with Archer City.

Pick N Run, owned by Raffaele A. Bruno, ran third behind Cowgirls Like Us in the Texas Stallion Stakes last August at Retama Park. The daughter of Intimidator is trained by Brandon Jenkins and will break from the far outside post under Benny Landeros.

The lightly raced Golden Lullabye, trained by Danny Pish, makes her second start of the meet at Sam Houston Race Park for owner Sam Sherman.  Pish will give a leg up to Danny Sorenson on the 4-1 third choice.

Ten-time leading Sam Houston Race Park conditioner Steve Asmussen has entered Legendary Song, a filly by My Golden Song. She was claimed for $25,000 at Remington Park and will make her stakes debut for owner Clark O. Brewster with y Iram Diego in the saddle.

The six-furlong Two Altazano Stakes will run as race six Saturday night with an approximate post time of 9:45 pm.

Calhoun, 54, became only the 30th Thoroughbred conditioner to win 3,000 races.

“I thought I was going to get it done the night before with Gold Buyer at Sam Houston, but it was nice to win at home,” said Calhoun, who resides in New Orleans and was joined by his wife, Sara, for the milestone presentation.

Calhoun has been training since 1993 and has maintained his allegiance to Texas racing despite his ascent to national prominence with graded stakes winners Dubai Majesty, Finley’sluckycharm, Mr Nightlinger and Fish Trappe Road.

He has a storied history in the Texas Stallion Stakes and Texas Champions Day events throughout the years at Sam Houston Race Park with victories by Coyote Legend, Gold Coyote, Taptam, Tin Top Cat,. Ibaka, Super Mason and Fiftyshadesofgold.

“He was incredible on the track, but drove me crazy pretty much before every start,” recalled Calhoun.  “It’s hard to describe his pre-race antics; sometimes he would just refuse to come out of the saddling stall. He would be fine in the race, but I would have washed out three times!”

According to Equibase statistics, Calhoun has won 352 races at Sam Houston Race Park, including five of his eight starts this meet.  As noted in this release, he will run four horses in Saturday night’s Texas Stallion Stakes.