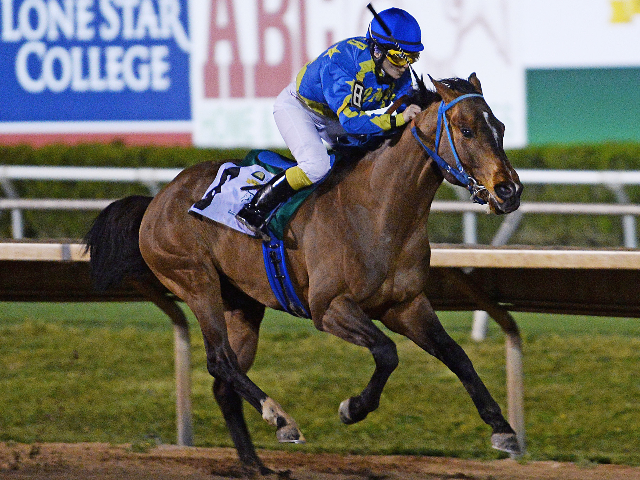 It was Belgium rider, Sara Vermeersch, who guided Royal Richess to victory, coming off the pace to notch her sixth career victory.  The 6-year-old daughter of TH Richie is owned by Ann S. Fostock and trained by Lynn A. Ashby.  She was bred in Virginia by Alan Kirschner and Deborah Mihaloff.

“We love coming to Sam Houston for this race,” said Ashby. “We drew a great rider; she listened and read the form on this mare. She knew what to do; it was awesome.”

Royal Richess, sent off at odds of 7-1, paid $16.00 for the win, covering seven furlongs in 1.34.16. Our Princess owned by Cre Run Enterprises ran second and Texas Yellow Rose champion, Jewell AA, owned by Betty and Joseph, was third.

Paddys Day Powered to the Wire in the $48,000 HH Sheikh Zayed Bin Sultan Al Nahyan Cup - Amethyst Jewel
A talented group of eleven colts and geldings showed their mettle in the Grade 1, HH Sheikh Zayed Bin Sultan Al Nahyan Cup.  Paddys Day, owned by Quarter Moon Ranch LLC, was sent off as the heavy favorite, and did not disappoint, rallying under regular rider Kelsi Purcell to a two-length win. The 5-year-old son of Burning Sand, had not run since October 16, but had no difficulty winning his 11th career race.

“He is an amazing horse,” said trainer Scott Powell. “We are so proud of him.”

There was a fifteen-minute delay due to a power failure in the placing judge’s stand. The horses were backed out of the gate, but Purcell said it made no difference to her stallion.

“It was tough, but he held his composure,” said Purcell. “He’s just an amazing horse and will go all the way this year.”

Four local celebrities served as "trainers" for the eight-foot tall Camels, who sprinted 100 yards in front of the enthusiastic crowd.  This year's winning trainer on Friday night was DK, KHMX Morning Show; she chose ADORE (All Dogs Official Rescue Enterprise) as her charity.  Saturday night’s winner was Krystina Ramey, of the 104 KRBE Morning Show. She selected Crime Stoppers as her charity.

End of the Meet Awards to be Presented on Tuesday, March 8
Just two more days remain in the 2016 Sam Houston Race Park Thoroughbred meet. Live racing returns on Monday at 1:00 p.m. and the Tuesday, March 8 will be the final day.  Racing is set for 1:00 p.m. and presentations will be made to the leading owner, trainer and jockey.