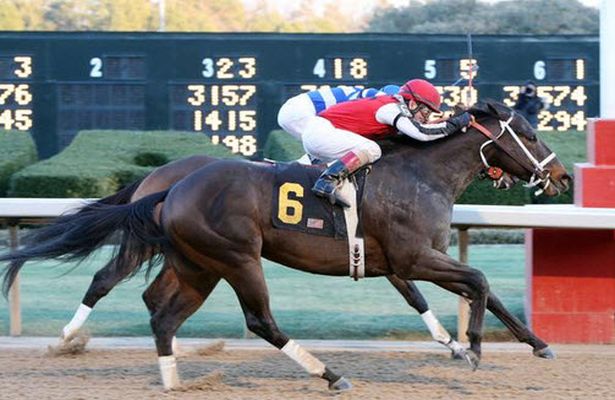 RIDE ON CURLIN HEADLINES THE FIELD FOR THE $100,000 MAXXAM GOLD CUP AT SAM HOUSTON RACE PARK ON SATURDAY, FEBRUARY 27

Ride On Curlin owned by Daniel J. Dougherty, has been installed as the 7-2 morning line favorite. Bred in Kentucky by G. Watts Humphrey Jr. & Louise Ireland, the 5-year-old son of Curlin has bankrolled $794,987 in his 19 career starts. Trained by William Gowan, Ride On Curlin was prominent on the 2014 Road to the Kentucky Derby with a runner-up finish in the Grade 1, Arkansas Derby, seventh place finish in the Kentucky Derby and runner-up effort to California Chrome in the Preakness Stakes.

This will mark Gowan's first start in Texas, and the distance of the Maxxam is what compelled him to ship his charge to Sam Houston Race Park.

"The further the distance, the better for this horse," said Gowan of the mile and one-eighth route.

He will ship in from Fair Grounds on Friday and looks to improve over his last start on January 16, when he finished third to International Star in the $75,000 Louisiana Stakes.

"He didn't get a chance to show his best form," stated Gowan. "He got caught in a tangle in the first 3/16th of a mile, but he came out of the race fine."

Larry Jones has a very solid stakes winning record at Sam Houston Race Park with two victories in the $400,000 Houston Ladies Classic with Joyful Victory and Cassatt and a win in the 2015 Maxxam Gold Cup with Albano. He will saddle Fox Hill Farms' Coup De Grace on Saturday night.  The 5-year-old son of Tapit was also in the mix in the aforementioned Louisiana Stakes, finishing fourth, but was disqualified and placed fifth.

"He thinks he's tougher than nails," said Jones. "He's a nice horse who has overcome some issues physically. As a young horse, he was very aggressive and more of a sprinter. But he's bred to go long, and I look for a good effort from him on Saturday."

Jones has given the mount to Florent Geroux, who will guide the Kentucky-bred from post position two. Coup De Gras has earned $484,160, with five wins in 13 races.

Trainer Joe Sharp, who has made many trips to Sam Houston Race Park when he was Mike Maker's assistant, ships in two runners for the Maxxam. Freestyler, owned by Carl Moore Management and Brad Grady, exits stakes company at Delta Downs and will be ridden by Brian Hernandez, Jr. and Joseph Besecker's Behemoth.  The Ontario-bred son of Giant's Causeway will make his 50th career start on Saturday, and is 12-1 on the morning line. However, his pilot, Robby Albarado, has an excellent record in the Maxxam Gold Cup. He has won four previous editions of the race; most recently with Red Riflefor trainer Todd Pletcher in 2014.

Mark Breen’s graded stakes winner Jessica’s Star, will make his return off a seven-month layoff for trainer Michael Stidham. The 5-year-old son of Magna Graduate was scratched out of Saturday’s Grade III $125,000 Mineshaft Handicap, and posted a nice work at Fair Grounds, covering five furlongs in 1:01 flat. Patrick Valenzuela, who rode a stakes winner in Houston on Texas Champions Weekend, has the mount.

The Maxxam Gold Cup will run as the seventh race of the February 27th card, which gets underway at 6:15 pm (CT). Three turf stakes, the $50,000 Jersey Lilly Stakes for fillies and mares, the $50,000 Bucharest Turf Stakes at five furlongs and the$50,000 Texas Heritage Stakes for 3-year-olds at the distance of one mile and one-sixteenth will also be contested on Saturday evening.