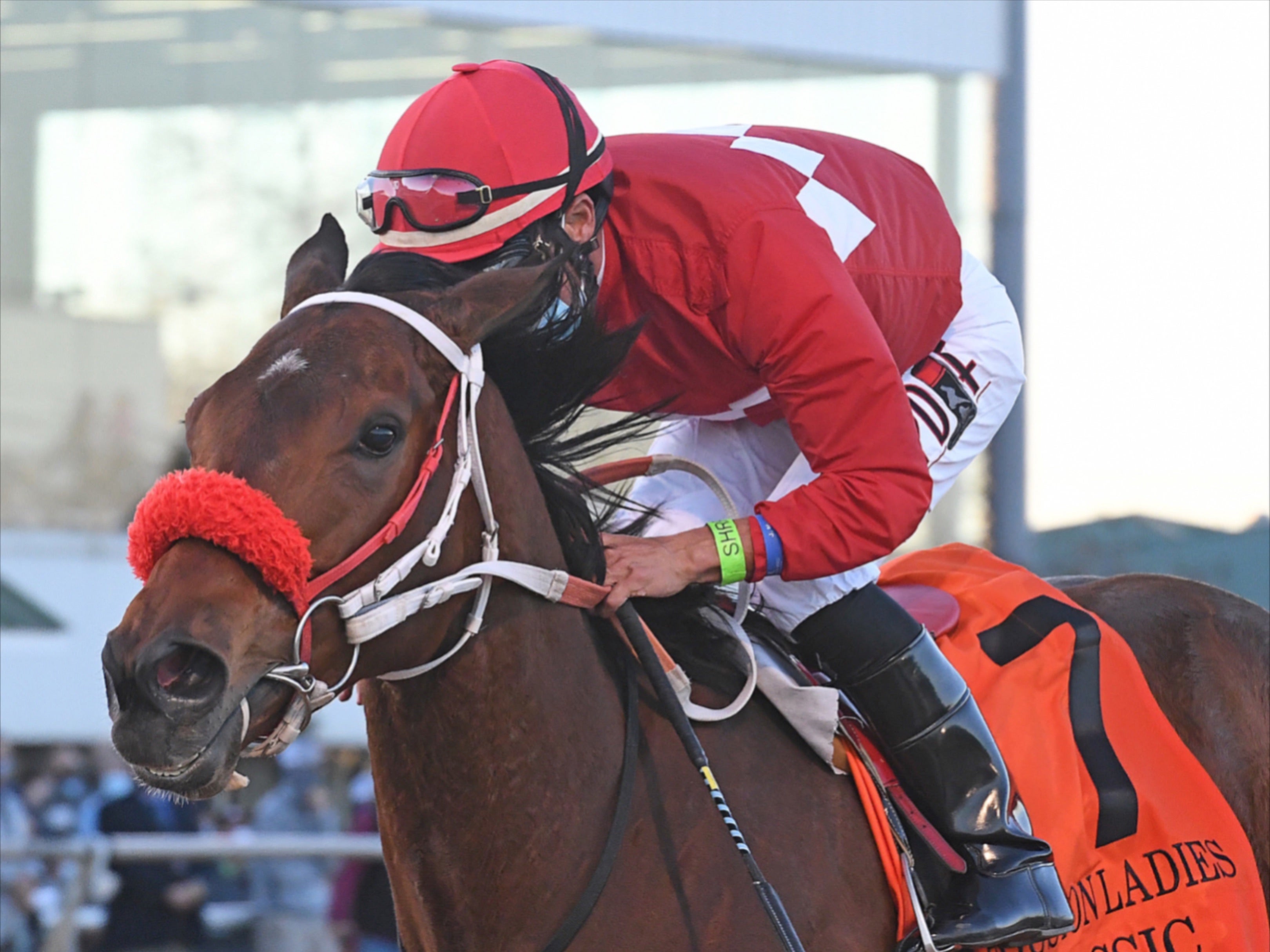 (Houston, TX) – The Sam Houston Race Park closed the curtain on a highly successful Thoroughbred live racing season on Saturday, April 3. The 43-day meet, which began on January 8, was one of the best since the northwest Houston racetrack opened in 1994.

A total of $12.6 million in purses were offered for the 2021 Thoroughbred racing season supplemented by House Bill 2463. Passed by the 86th Texas Legislature on September 1, 2019, the bill contributes $25 million annually to the Texas horse racing industry, split equally between Thoroughbred and Quarter Horse interests. Sam Houston Race Park set avery lucrative $2.4 million stakes schedule, up from $1.8 million in 2020.

The Houston Racing Festival on Sunday, January 31 jumped off the pages with a record-setting handle of $5.3 million on the day. The premier day of the season is highlighted by the Grade 3, $300,000 Houston Ladies Classic, won by Letruska, who is pointed to the Grade 1, Apple Blossom at Oaklawn Park and victory by Spooky Channel in the Grade 3, $200,000 Connally Turf Cup. Horsemen and horseplayers responded in an unprecedented fashion, so much so, that purses were increased twice throughout the season.

In addition to longtime support from leading North American trainers Steve Asmussen andKarl Broberg, Sam Houston Race Park welcomed new horsemen including New Mexico-based Todd Fincher and west coast conditioners Frank Lucarelli and Jonathan Wong.Trainer J. R. Caldwell was one of many conditioners who began pointing their horses to Houston once it was announced that overnight purses would start at $225,00 per day.

“The 2021 thoroughbred season was a culmination of the blueprint we set into place in 2019,” said Sam Houston Race Park’s Senior Director of Racing Operations Frank Hopf.  “The success of the 2021 meet is a credit to the tremendous support SHRP received from the owners, trainers, horseplayers, hard-working staff and partners. We will build upon this meet and continue to improve moving forward.”

The nationally prominent horseman, who tops the Equibase leader board in 2021 in both wins and earnings, has always shown his allegiance to Texas racing. Encouraged by the passage of House Bill 2463 by the Texas Legislature on September 1, 2019, which was initiated to boost the state’s racing and breeding industry, Asmussen wanted to strengthen his commitment to Texas racing this year.

“The Bill has improved the quality of Texas racing,” stated Asmussen. “To have purses generated by equine generated tax revenues is an excellent model. You can see our surrounding states that have depended on casino funded purses struggle. Look at the handle this year at Sam Houston! This program needs to be supported.”

In addition to the purse and stakes increases, Asmussen lauds the track surfaces in Houston.

“The racing surfaces are excellent and frankly, the main track does not get the credit it deserves,” he added.

Asmussen once again, thanked his longtime assistant, Pablo Ocampo, for overseeing the day-to-day operation in Houston.

"Pablo is the longest continuous employee for me and continues to do a wonderful job,” said Asmussen of Ocampo, who will head next to Lone Star Park.

J. R. Caldwell was second in the standings with 34 victories, including back-to-back stakes victories by Sky Ride. Trainer Austin Gustafson had his best showing this year, winning 29 races and Karl Broberg rounded out the top four conditioners with 22 winners.

Jockey Stewart Elliott picked up his first leading rider title at Sam Houston Race Park in pretty much gate-to-wire fashion. The nationally respected veteran rode first call for Asmussen this meet, riding 62 winners from 271 mounts, earning $1,597,545 and finishing in the money at a lofty 55%.  The successful union between Elliott and Asmussen began in Houston one year ago and continued at Lone Star Park and Remington Park.

“Stewart brings professionalism and consistency in every race he rides,” stated Asmussen.

In turn, Elliott shared his gratitude to the Hall of Fame conditioner.

“I especially have to thank Steve who kept me loaded up pretty good throughout the meet,” he said.

In accepting his leading rider award, Elliott also acknowledged the support of his wife, Lilibeth and son Christopher, as well as his agent, Scott Hare.

Elliott, 55, will head to Lone Star Park for their 2021 Thoroughbred meet. He began riding in 1981 and has a remarkable 5,133 career wins, including the victory aboard 2004 Kentucky Derby and Preakness winner Smarty Jones. Retirement talk will have to wait for now, as Elliott is truly enjoying this stage of his exceptional career.

Ry Eikleberry was a new addition to the Sam Houston jockey colony this year and made an impressive debut, winning 42 races to finish second in the standings.  Leandro Goncalves also had an excellent meet, with 41 victories, including his 2,000th career race on March 27. Lane Luzzi  continues to be one of the up and coming riders in the region. The son of New York veteran jockey Mike Luzzi made 35 trips to the winner’s circle to finish fourth this year.