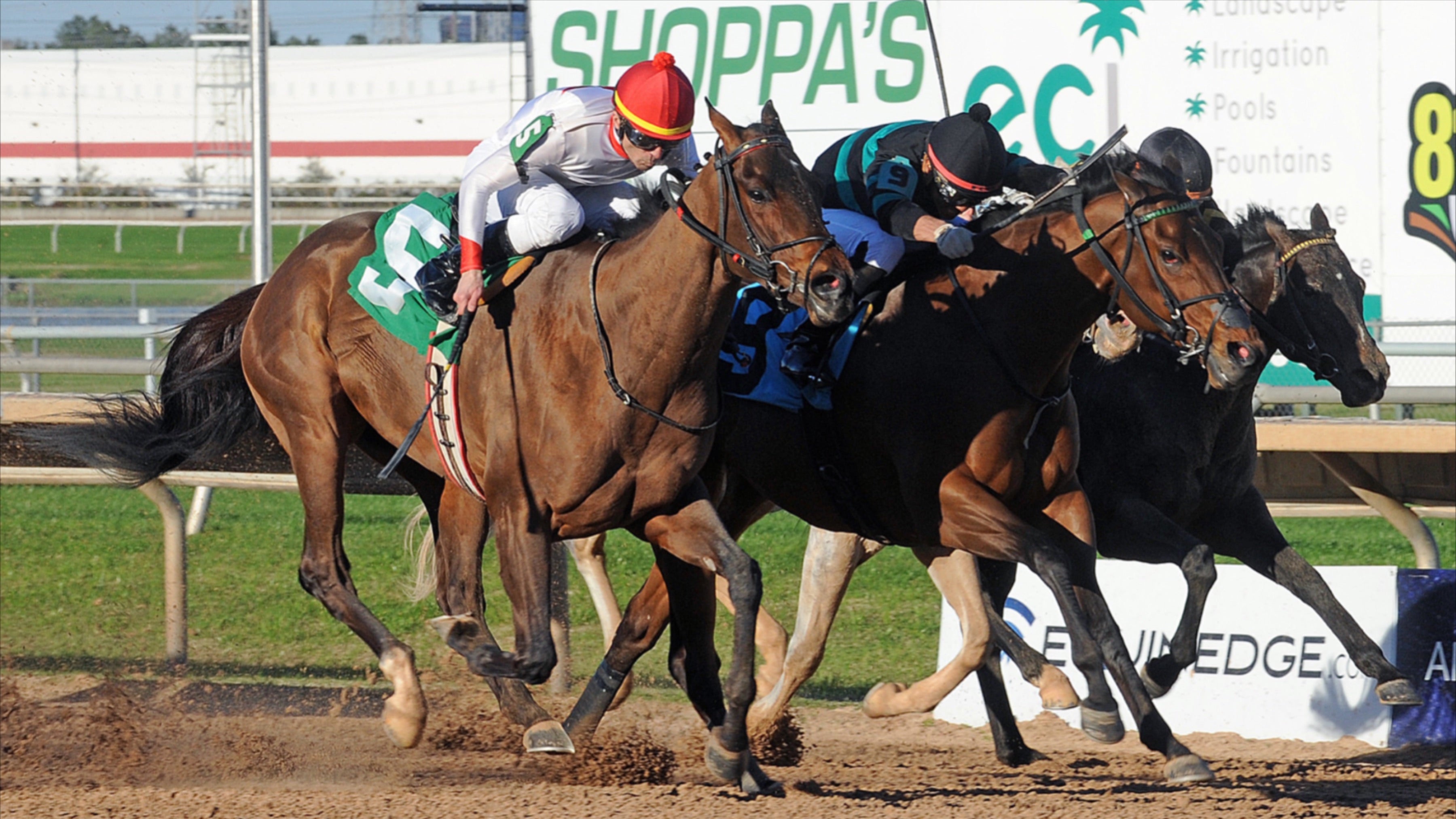 HOUSTON, TX- While the Grade 3, $300,000 Houston Ladies Classic and the Grade 3, $200,000 John B. Connally Turf may have attracted the greatest interest from the media and the national racing audience, there were impressive performances in the four Houston Racing Festival undercard stakes. Here are the recaps for the $200,000 Texas Turf Mile, $100,000 Pulse Power Turf Sprint, $75,000 Stonerside Sprint and $75,000 Jersey Lilly Turf. The Houston Racing Festival 10-race card set a handle record for the track with $5.3 million wagered.

"We are thrilled with the success of this year's Houston Racing Festival and setting a record handle of $5.3 million," saidFrank Hopf, Senior Director of Racing. "It was a team effort from everyone at Sam Houston and our thanks go out to all the horsemen and owners for supporting our meet. This would not be possible without our horseplayers, both here in Texas and nationally. It was a great day!"

In the second running of the $200,000 Texas Turf Mile, Palazzi emerged as the photo finish winner of the one-mile turf route to win his stakes debut. The 3-year-old Pioneerof the Nile colt stalked from mid-pack and closed swiftly in the stretch to defeat a full field of ten with a time of 1:36.89.

Palazzi is owned by John C. Oxley and trained by Mark Casse; Declan Carroll had the call on the colt for the first time.

'I have to thank Mark Casse and Mr. Oxley; it was huge," said Carroll, who is the son of David Carroll. "The horse was training well and gained a lot of confidence at Fair Grounds.  I was in a beautiful position, saved ground all the way, relaxed nicely and kicked home."

With two wins in six career starts, Palazzi ($7.00) has earned $158,520 and is undefeated on the turf after breaking his maiden in his most recent start at the Fair Grounds.

"This horse came to Fair Grounds after his debut at Keeneland," said Shane Tripp, who saddled for Casse. "A lot of the credit goes to David Carroll and his wife, Kim, as Palazzi really got comfortable and won his last [on December 19]. Declan saved ground and finished well on him today. We ran Jack and Noah in this race last year and think it's a great race for these 3-year-old turf horses."

The Houston Racing Festival stakes action kicked off with a win by Fast Boat in the $100,000 Pulse Power Turf Sprint, a five-furlong turf stakes with a field of nine in the first of the six stakes of the day.

Fast Boat, owned by Brad Grady, was second in the 2020 edition of the Pulse Power Turf Sprint for trainer Joe Sharp. Since the tough loss in last year’s race, the 6-year-old City Zip gelding won an optional claiming event at Churchill Downs and competed in a pair of graded stakes at Keeneland, including a fourth place finish in the Grade 2, $150,000 Shakertown Stakes.

Miguel Mena had the call in this year’s race and used the replay of the 2020 loss to prep for Sunday’s victory.

"I watched his replay from last year," said Mena. "He likes to be covered up and make one run, so Joe just told me he would like this turf course. I put him on the outside and he took off. He was much the best."

"Fast Boat obviously loves the Connally Turf course," added Sharp. "He had a tough beat here last year in this race. The win today was a combination between horse and rider. He's worked really hard and deserves the stakes win. He'll go to the farm for 30 days, freshen up and head to Keeneland and Churchill. We wish Brad Grady could have been here today, but he's showing pigs!"

The Houston Racing Festival heated up in the second stake on the card as Sky Ride and Hollis hit the wire together in the $75,000 Stonerside Sprint to share a dead heat victory. The final time for the 6-furlong sprint on the fast main track was 1:10.70.

Hollis, a 6-year-old Street Sense gelding trained by John Ortiz, won the $100,000 Jim McKay Turf Sprint at Pimlico in October and was third in his most recent start, the $75,000 Richard Scherer Memorial at the Fair Grounds. Reylu Gutierrez had the call for the first time on Hollis for owners WSS Racing, LLC and 4 G Racing, LLC.

"It wasn't exciting; it was flabbergasting," said an elated Gutierrez. "You get plan A, B, C in mind, but when I saw myself in front, I said hot diggity! Credit to John and his team for having him ready and my agent [Joe Santos] for finding me this horse."

Gutierrez and Hollis enjoyed a comfortable lead from the start of the race and tried to hold off fast-closing Sky Ride and Leandro Goncalves at the wire. Sky Ride is trained by J.R. Caldwell for owner Triple V Racing LLC.

"He has a real good closing kick and we liked him up there in Oklahoma," said Caldwell. "We had a nice prep here and we looked at the shippers coming in with speed and thought we'd give it a go."

Sky Ride prepped for the Stonerside with a win in an optional claiming 6-furlong sprint on January 9 at Sam Houston. The Stonerside was the first stakes start for the 4-year-old gelded son of Candy Ride.

The race, formerly named the Sam Houston Sprint Cup, was renamed in 2020 to honor the late Robert C. McNair and his Stonerside Stable. The well-respected Thoroughbred operation, in central Kentucky, produced national and international racing stars, including Congaree, Bob and John, Tout Charmont and Chilukki. McNair sold Stonerside Stable to Darley in 2008 to devote his full attention to his Houston Texans NFL team and numerous philanthropic causes.

A full field of turf mares wrapped up the stakes action as Morning Molly won her first stakes race in the $75,000 Jersey Lilly Stakes.

Morning Molly stalked the pace set by Catch a Bid and Kuora before striking in the stretch to win by a head. The fillies and mares covered the 1 1/16 miles in 1:44.70 over a firm turf course.

Morning Molly ($7.80) was ridden by Ty Kennedy for trainer Thomas Proctor. Willow Lane Stables own and bred the 5-year daughter of Morning Line.

"She's just a really nice filly," said Kennedy. "Tom does not send a horse across the country just to run; he sends them for a purpose. He and his crew are world class.  She is such a tactical filly; she's won on the lead and in her last start, she was six lengths off of it! I sat off the pace, knowing she has a huge kick and she got it done!"

Post-time favorite Stunning Sky closed from far back and attempted to run down Morning Molly at the wire but finished second under Julien Leparoux for trainer Mike Maker. Valentines Day, at 21-1, was third for trainer Bret Calhoun and jockey Ry Eikleberry.

Live racing continues on Thursday, February 4 with a 4:00 pm post and continues on Friday and Saturday with the first race set for 6:45 pm. Sam Houston Race Park will add Wednesday afternoon racing, also at 4:00 pm, beginning on February 10.