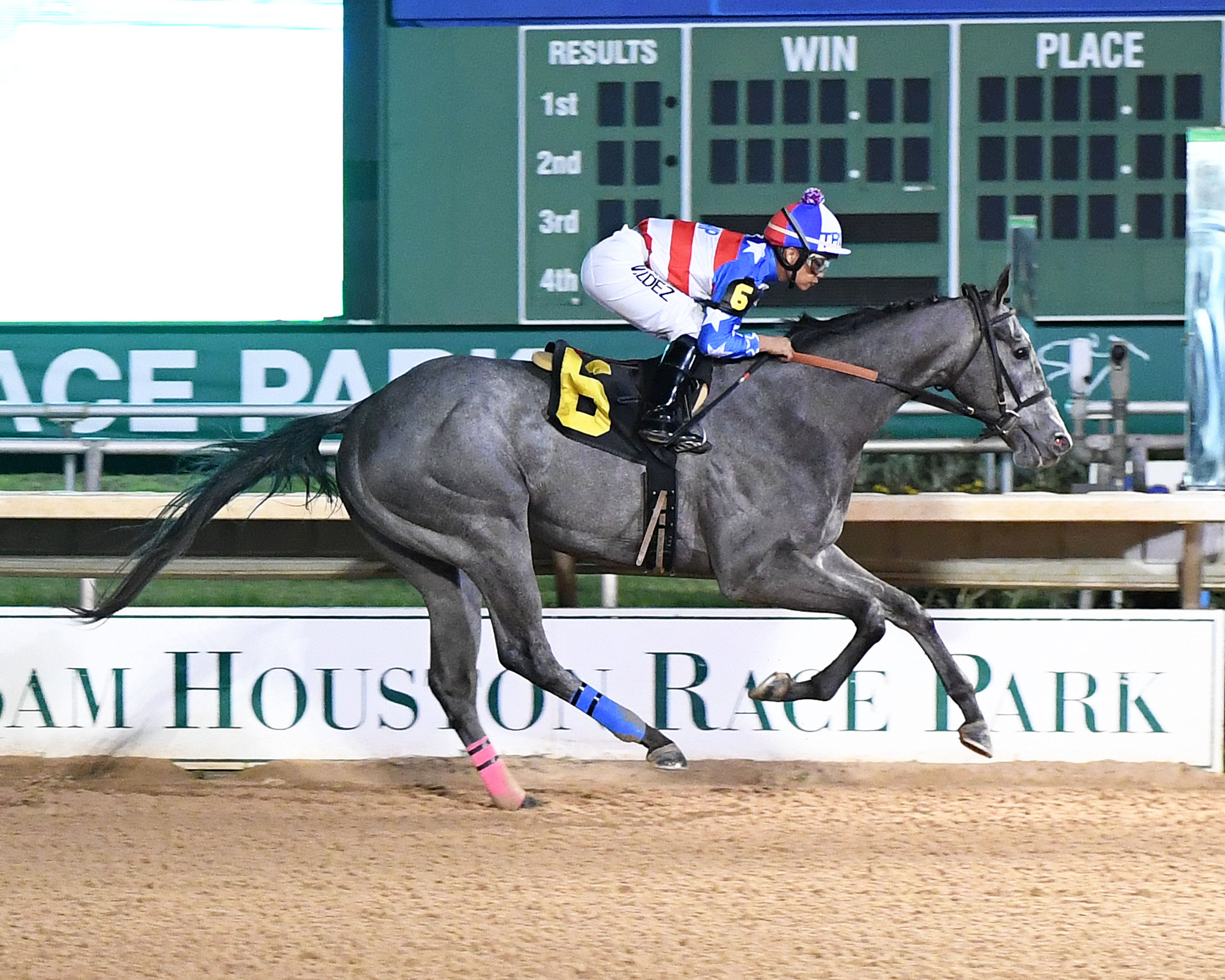 Mr Money Bags Captures Second Stakes Victory of the Meet in the $50,000 Groovy

Mr Money Bags who dominated in last month’s $65,000 Jim’s Orbit here, returned with an even more impressive victory in the six-furlong $50,000 Groovy Stakes.

The son of Silver City is bred and owned by Roy W. Cobb and drew off to a five-length victory in the $65,000 Jim’s Orbit Stakes in a swift 1:10.86. Trainer Mike Neatherlin was pleased with the ride by Ernesto Valdez-Jiminez and tabbed him aboard the 2-5 morning-line favorite. Once again, it was a comfortable trip for the gray colt, who drew off by seven lengths in an even faster final time of 1:10.35.

He's a nice horse," said Valdez-Jiminez. "All you have to do is stay on and he goes

Neatherlin continues to be impressed with the professionalism of Mr Money Bags.

"We took his blinkers off, trying to get him to relax and it seemed to help today,” said

Neatherlin.  “We'll see how he comes out of the race before deciding what’s next. It’s funny that we stand him a lot and he is very calm, but once you put the saddle on, he turns into a beast.”

My Bling, who ran second in the $65,000 Jim’s Orbit, was once again the runner-up under jockey Lane Luzzi.  Kenai Bob ran third, followed by Trumps Revenge, Final Exam, With The Band and Moro Chief.

Triple Crown nominated Mr Money Bags ($2.40) has now won four of his five career starts with lifetime earnings of $117,300. Neatherlin and Cobb were partners on Kip Deville, who won the 2006 Texas Heritage Stakes at Sam Houston before advancing to national prominence as a multiple Grade 1 champion.

Direct Dial Gets His Fourth Career Stakes in the $50,000 Spirit of Texas

Will S. Farish’s homebred Direct Dial, sired by leading Texas stallion Too Much Bling, won the 2018 Jim’s Orbit here for trainer Steve Asmussen. Confidently handled by jockey DeShawn Parker, the gray colt advanced gamely as he approached the top of the stretch and drew off by a margin of 5 ½ half lengths. He was clocked in 1:10.75.

“I watched his last race and he got in trouble,” said Parker. “When I got him in the clear, I just let him do his thing and he did it all himself. He’s all class.”

Asmussen did not make the trip to Houston, but his parents Keith and Marilyn attended the Texas Thoroughbred Association Awards Dinner and were pleased to see another stakes win from Direct Dial, who they broke at their training center in Laredo.

“He was always very smart, very developed and did everything right,” recalled Marilyn Asmussen. “It is always a thrill to watch him. The Farish family have a rich history in this state and we are very proud to be associated with them.”

Shes Our Fastest Rallies for The Win in the $50,000 Yellow Rose Stakes

Six fillies and mares were featured in the six-furlong $50,000 Yellow Rose Stakes with Shes Our Fastest owned by Mark Norman and Norman Stables Inc. overcoming a troubled start to prevail as the strong favorite.

With jockey Iram Diego in the saddle, the 4-year-old daughter of Oratory, closed gamely to prevail over Zarelda in 1.11.40 over a fast track.

"We returned to run against Texas-breds and she did what she had to do,” said Gelner. “She didn't get away good, but we had a good jock. He didn't panic and she came home well."

Bred by Eureka Thoroughbred Farm, Shes Our Fastest ($3.00) earned $30,000 for the victory, improving her career record to five wins from 15 starts.  Gelner indicated that the dark bay filly will make her next start at Lone Star Park.

The $50,000 San Jacinto Stakes for fillies and mares attracted a field of six going a mile and one-sixteenth on the Connally Turf Course.

Trainer Mindy Willis felt that her mare, Texas Belle was poised for a good effort. The 7-year-old daughter of Angliana, owned by Richard P. Chandler, entered the feature in search of her third consecutive victory on the turf.  Jockey Rudy Guerra guided her to the lead and outlasted Coraluna by a half-length in a final time of 1:45.82 over a firm turf course.

“I was horrified when I saw her on the front," said Willis. "You always think she will lay off the pace, but they were going slow and they had to come get her. There's nothing like a couple wins under your belt to build confidence."

Owner Richard Chandler was very proud of his stakes winner, who has a proven track record over the Connally Turf Course.

This was the ninth win from 35 starts for the bay mare, also bred by Eureka Thoroughbred Farm,  who returned $3.20 as the heavy favorite. Coraluna, under rider Leandro Goncalves, ran second, followed by Witts Town, Sexy Dance, Mr Royal Rocket and Seven Violets.

A field of eight accredited Texas-bred fillies competed six furlongs in the $50,000 Bara Lass. It was a successful foray into stakes company for Ima Discreet Lady, who powered home by 3 ¾  lengths under Iram Diego.

The daughter of Discreet Cat is trained by Karl Broberg for owners Raymond Todd White and Duane Coker. She was making her ninth career start following two solid allowance scores at Delta Downs. Sent off as the favorite, the gray filly rallied comfortably for the win, crossing the wire in 1:11.73.

“She looked relaxed and Iram did everything right,” said Broberg, who was reached by phone following the race. “The rail opened up and that was it. I am very happy for my owner, Todd White. He is a very cordial client and it was his first stakes win!”

Bred by Larry S. Huntsinger, Ima Discreet Lady ($4.40) has earned $90,303 to date. Broberg  was not sure of her next start, but indicated that he will be looking for another six furlong race for his filly.

Redatory Scores the Upset in the $50,000 Richard King Stakes

The final stakes of the evening, the $50,000 Richard King Stakes, for 4-year-olds and upward, on the turf, produced the only upset on the card. Redatory, owned and bred by James Wessel, was making just his second start on the grass and gave jockey Rudy Guerra his second stakes win of the night.

“We had a good trip,” said Guerra. “I watched his race at Remington Park; he was pretty relaxed on the lead, and he had the stamina to finish.”

Redatory won by a neck over Bonjour Baby, in 1:51.23 over the firm turf course.

Trained by retired jockey Allen Dupuy, the son of Oratory was named Texas Thoroughbred Association (TTA) champion 2-Year-Old Colt/Gelding in 2017. However, he lost each of his six starts in 2018, which was very frustrating for Dupuy.

“I always wanted to run him on the grass,” he said. “When I ran him at Remington, he got in all kinds of trouble. Everything bad that could happen in a race, happened to him, so I just told Rudy to keep him clear, and it worked out.”

Sent off at odds of 32-1, Redatory rewarded his backers with a win payout of $66.40. This was his third victory in 11 starts. With the winner’s share of $30,000, his lifetime earnings stand at $126,524.  Dupuy said that Redatory would head to Louisiana, but left his options open for now.

Hi Heat Boy, owned by Wayne Buehrer won the opening race of the Texas Champions Day card, named in honor of Double Your Flavor,a mare who won 17 races at Sam Houston Race Park in the 1990’s.

Owned by Dr. Jeffrey Kass, the daughter of Amerrico Double broke her maiden at first asking at Trinity Meadows in 1994 and over the next five years won 17 more races, all at Sam Houston. She was best known as a distance runner on the turf, but she could also win going six furlongs on the dirt. Though she never won a black-type stakes, she did take second in the Fiesta Mile Stakes at Retama Park. All told, she compiled a record of 51-18-6-2 with earnings of $73,080. She remained in Texas and recently passed away at the age of 28.