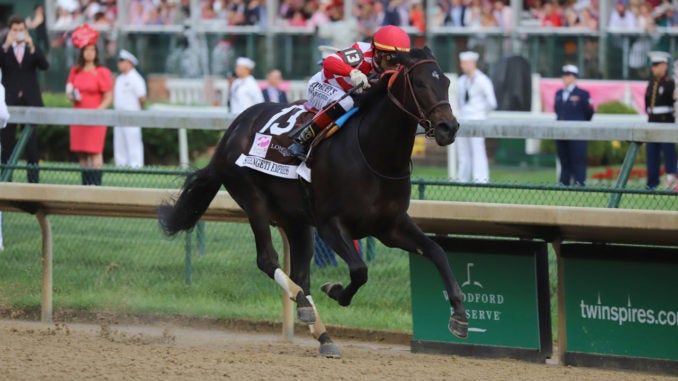 Six Stakes will be Contested Sunday, January 26 With a Special Post Time of 1:20 pm

HOUSTON, TX- One week from today, Sam Houston Race Park will host the most prestigious day of its annual live Thoroughbred racing season.  The draw for the six Houston Racing Festival stakes took place this morning for each of the features, including the Grade 3, $300,000 Houston Ladies Classic.

Now in its eighth running, the Houston Ladies Classic has been a springboard for the top older fillies and mares with last year’s champion Midnight Bisou, racking up six more graded stakes following her victory in Houston for Hall of Fame conditioner Steve Asmussen. One of the top contenders for Champion Filly and Horse of the Year in Saturday’s Eclipse Awards, she is currently training for her 2020 debut in the $20 million Saudi Cup.

Six highly capable fillies and mares will compete in this year’s mile and one-sixteenth main track event, led by 2019 Kentucky Oaks champion Serengeti Empress. The daughter of Alternation out of the Bernardini mare Havisham was a $70,000 Keeneland September sale purchase by owner Joe Politi. Trained by Tom Amoss, she had an impressive run last year, winning the 2019 Rachel Alexandra at Fair Grounds Oaks prior to her victory in the Grade 1, Kentucky Oaks. The bay filly ran second in the Grade 1, Acorn and Grade 1, Test and completed her 3-year-old season with a third-place finish in the Breeders' Cup Distaff last November at Santa Anita. In 12 career starts, she has already earned $1,462,120.

“There were a few things for consideration,” he stated.  “It just seemed like a logical starting point for 2020. The purse is very good, and the race has been an excellent first stakes of the year for several very nice fillies.”

Amoss opted to bring in California-based jockey Flavien Prat, who rode Serengeti Empress in the Breeders’ Cup. He has been pleased with the work tab of his filly. She has posted solid four furlong drills on January 5 and January 12, adding her final work Saturday, January 18.

“She worked a half-mile on Saturday morning to sharpen her,” he added. “Our game plan is to send her to the lead as she does her best running using her natural speed.”

This will be the second time Amoss has shipped in for the Houston Ladies Classic. He ran fifth in the 2015 edition of the race with Kiss to Remember.

The second millionaire in the field is Street Band who is trained by Larry Jones. He was one of the first nationally prominent horsemen to point toward the 2020 Houston Ladies Classic. Street Band was bred by Jones, his wife, Cindy and Ray Francis. She is the daughter of Istan out of the Street Cry (IRE) mare Street Minstrel and is co-owned by her three breeders as well as Medallion Racing and MyRacehorse Stable.

Street Band broke her maiden at Ellis Park on September 3, 2018 and went on to win five of her 13 starts, including the Grade 3 Indiana Oaks and the Grade 1, Cotillion. The chestnut filly last competed in the Grade 1, Longines Breeders’ Cup Distaff, running eighth, and already boasts career earnings of $1,072,425. She has been training forwardly for her 4-year-old campaign.  Sophie Doyle has been the regular pilot aboard Street Band and has the return call at odds of 5-2.

Jones has won two previous editions of the Houston Ladies Classic, beginning with the inaugural running in 2013 with Joyful Victory and in 2015 with Cassatt.  He also ran second in 2017 with I’m a Chatterbox and knows that Street Band will be facing some very accomplished rivals.

“It looks like the toughest one yet,” acknowledged Jones, "This race at Sam Houston Race Park has been a nice fit for us and to win it three times would be great for this cowboy!”

Asmussen has hopes of a second victory in the Houston Ladies Classic with Lady Apple, a multiple-graded stakes winning filly by Curlin. Owned by Phoenix Thoroughbred III and KatieRich Farms, the versatile filly had stakes wins at Oaklawn Park, Prairie Meadows before taking the Grade 3, Remington Park Oaks on September 29. Jockey Ricardo Santana, Jr. will guide the bay filly who has amassed a bankroll of $811,960 in 11 career starts.

Shipped directly from Remington Park in December, Lady Apple has posted a series of impressive works at Sam Houston Race Park, including her latest five furlong drill on Wednesday, clocked at a 1:00; fastest of 37 workers that morning.

“She’s a quality filly,” said Asmussen. “It was very unfortunate that she had to miss the Zia Oaks (as shipping restrictions were enacted due to reported cases of equine herpesvirus EHV-1 at Remington Park).  “We sent her directly to Sam Houston at the end of the Remington meet and had to schedule extended works to prepare for the Ladies Classic.”

Asmussen won his first Houston Ladies Classic last January with the super filly Midnight Bisou and celebrated a major milestone yesterday at Fair Grounds when he won his 1,000th career stakes win with Finite in the $250,000 Silverbulletday.

“I have nothing but respect for the competition this year,” said Asmussen, who will give a leg up to rider Ricardo Santana, Jr. “The Houston Ladies Classic was the first stakes for the successful year we had with Midnight Bisou.We hope that Lady Apple moves forward as well from her 2020 debut.”

The field also includes Mylady Curlin, bred and owned by Sather Family LLC and trained by Brad Cox, who won the 2017 Houston Ladies Classic with Tiger Moth.  Mlady Curlin, a 5-year old Curlin mare, has won eight of her 15 career efforts, banking $718,063.  Jockey Tyler Gafflione who rode her to victory in the Grade 2, Fall City Handicap at Churchill Downs on November 28, has the return call, at odds of 7-2.

The field also includes Out for a Spin, trained by Dallas Stewart, who won the Grade 1, Ashland at Keeneland, before competing in the 2019 Kentucky Oaks. The 4-year-old filly by Hard Spun will be ridden by Brian Hernandez, Jr. Saracosa, trained by Brendan Walsh, won the Bob Fortus Memorial last month at Fair Grounds, completes the field. Corey Lanerie, who won the leading riding title at Sam Houston Race Park in 1995 and 1996, has the call aboard the 6-year-old daughter of Bernardini.

Inaugurated in 2013, the Houston Ladies Classic was formed to serve as the marquee race for Sam Houston’s Thoroughbred meet. Now in its eighth running, the mile and one-sixteenth Houston Ladies Classic anchors the Houston Racing Festival, which also includes the Grade 3, $200,000 John B. Connally Turf Cup, the $100,000 Frontier Utilities Turf Sprint, the $75,000 Jersey Lilly Turf Stakes, the $75,000 Stonerside Sprint and a new addition this year, the $200,000 Texas Turf Mile for three-year-olds.

Trainer Mike Maker Looks for His Eighth Victory in the G3, $200,000 John B. Connally Turf Cup

The second graded stakes of the Houston Racing Festival is the Grade 3, $200,000 John B. Connally Turf Cup, to be run at the distance of one and one-half miles. A field of 12, including six turf specialists from the barn of Mike Maker, will be run as the ninth race of the matinee card.

He has several excellent prospects this year, including Cross Border, owned by Three Diamonds Farm. Sired by English Channel, he last competed in the Grade 2, Fort Lauderdale Stakes at Gulfstream Park. Flavien Prat will guide the 6-year-old from post position 2 as the 7-2 morning line choice.

“He ran well at Belmont, which was also at the distance of a mile and one-half,” said Maker. “It wasn’t a great trip in his most recent; he and my other runner, Marzo, got in each other’s way.”

Marzo, also owned by Three Diamonds Farm, captured the Grade 3, Sycamore at Keeneland, will be ridden by Corey Lanerie at odds of 9-2.

Bemma’s Boy, a 5-year-old son of Into Mischief, will break from the far outside post under Tyler Gafflione and should not be ignored, according to Maker.

“We gave him a freshening after Churchill Downs and has been training well,” he said. “I think he will like the added distance.”

Maker has won six of the last seven editions of the Connally with Papa Bodie in 2012; Admiral Kitten in 2014; Coalport in 2015; Da Big Hoss as well as the last three years with Bigger Picture.

Trainer Brad Cox could impact the Maker win streak with Ten Strike Racing’s Dot Matrix, who has won nine races and is close to the half- million in earning mark. He will make his first start since the Grade 3, Red Smith at Aqueduct under jockey Florent Geroux.

The field for the Connally, from the rail, with riders and morning-line odds is:

In addition to the two graded stakes on the Houston Racing Festival card, Sam Houston Race Park will present the following features. An additional press release will be forthcoming.

“We are very appreciative of the trainers and owners for supporting the 2020 Houston Racing Festival,” said

Frank Hopf, Sam Houston Race Park’s Senior Director of Racing Operations. The Festival continues to evolve and is becoming a great opportunity for horses to start their racing seasons. The day has always been anchored by our two graded stakes. The Houston Ladies Classic could be one of the best in 2020 for the division. The addition of the Texas Turf Mile, has been incredibly well received and may quickly rival the Houston Ladies Classic and Connally Turf in popularity.”