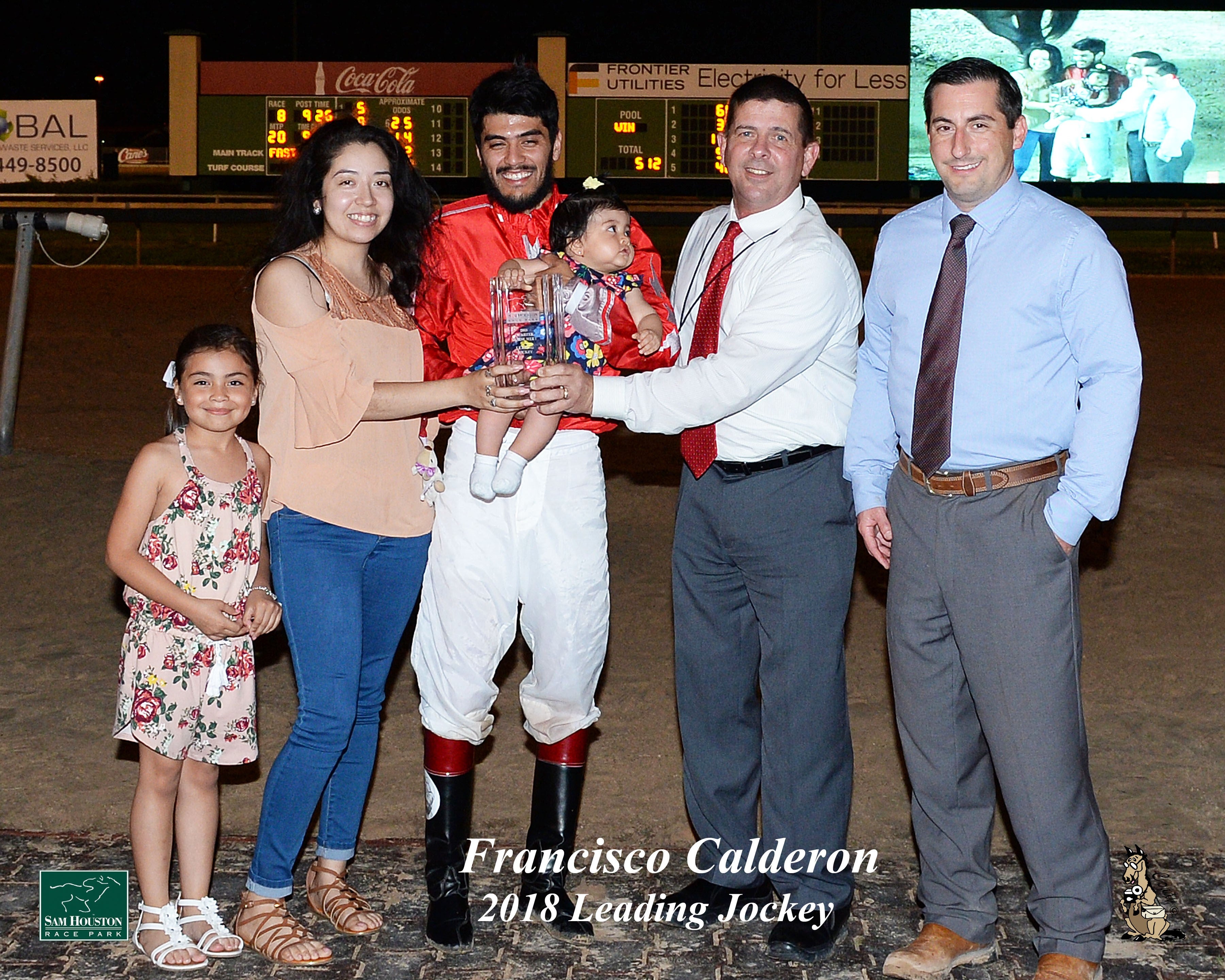 LEADING JOCKEY, TRAINER AND OWNER OF THE MEET TITLES WERE PRESENTED ON SATURDAY, MAY 12 AT SAM HOUSTON RACE PARK

The 2018 Sam Houston Race Park Quarter Horse Meet concluded on Saturday, May 12 with ten races and the presentation of the End of the Meet awards. The 20-day live racing season began on March 30 and featured 12 stakes highlighted by the $440,600 Sam Houston Futurity (G2) on April 28.

Officials were pleased with several positive trends in handle throughout the meet.  The per race handle was up 7% over 2017 and two of the highest Quarter Horse handle totals since the track opened in 1994 were set. On March 30, which was opening night for the 2018 Quarter Horse season, Sam Houston handled $970,000.  Also, a total of 13 trials for the Sam Houston Futurity were contested on Friday, April 7, and fans here and at simulcast facilities wagered a total of $930,000 on the card.

“We are certainly appreciative to our horsemen and bettors, both locally and across the country who continue to get behind our Quarter Horse racing product,” said Sam Houston Race Park Senior Director of Racing, Frank Hopf. “This year in particular, we received strong support from Los Alamitos which helped drive our handle.”

With three victories on the final night of the meet, Francisco Calderon made the most of his 2018 Sam Houston Race Park season, topping his fellow riders with 23 wins.

This is the first Sam Houston leading jockey honor for the 24-year-old, who was born and raised in San Antonio, Texas and began riding in 2012. He was second to Rodrigo Vallejo last year, but with multiple victories for trainer Leon Bard, and many other horsemen, he was able to secure his first Houston title.  Calderon won two previous leading rider titles in Texas, finishing on top at Lone Star Park in 2016 and last summer at Retama Park.

Eddie Sanchez and Claudio Ponce Aguilar tied for second with 13 wins and Jose Ivan Martinez won 11 races to round out the top three.

Calderon and his wife, Valerie, welcomed their first child last August, a daughter named Viridiana. Calderon will head to Retama Park and will also make several trips this summer to Ruidoso Downs in New Mexico.

Bard completed the season with a record of 14 winners from 73 starts, with 16 second-place and 9 third-place finishes. His runners earned $116,485.  He won the 550-yard Harris County Stakes with Southern Temptation on March 31. Ricardo Aguirre served as Bard’s assistant.

Padgett’s stats for the meet were 76 starts, 14 wins, 11 seconds, 13 thirds and earnings of $149,507. While he did not have a stakes winner this season, Rc Me Leaving You and Flyingforunclesam finished second and third, respectively, in the $67,680 Bank of America Texas Challenge Championship (G2) on April 21. Flyingforunclesam returned to action on May 12 and was the runner-up in the Sam Houston Classic (G2). Padgett was based at Remington Park this Spring and relied on assistant Alonso Hernandez to oversee the Sam Houston Race Park runners.

Saul Ramirez, Jr. was third with 11 wins, and a special mention to trainer Abelardo Flores, Jr., whose horses won six stakes during the meet.

Ricardo Barrera of Odessa, Texas, led all owners with 6 wins to capture his first leading owner title at Sam Houston Race Park. Involved in racing since 2016, his top performers this meet included Austonian, who won twice this season; the stakes-placed filly One Sweet Picky and Tempting Pink. His horses were trained by Rodolfo Sanchez.

Ruben Garcia Montemayor was second with five wins, including stakes victories by Eye N Capo and Three Bar Cartel on the final night of the meet. His horses were conditioned by Abelardo Flores, Jr. throughout the meet.  Pamela S. Stone finished third with four wins. Her horses were trained by Leon Bard.

While live racing has wrapped for the year, Sam Houston Race Park will remain open seven days a week offering a comprehensive menu of simulcast racing. Next up is the Preakness Stakes from Pimlico Race Course on Saturday, May 19 and the final leg of racing's Triple Crown, the Belmont Stakes on Saturday, June 9. Popular race meets including Monmouth Park, Saratoga and Del Mar will showcase top Thoroughbreds this summer and Quarter Horse fans will be able to watch and wager on "America's fastest athletes" at Ruidoso Downs, beginning May 25.