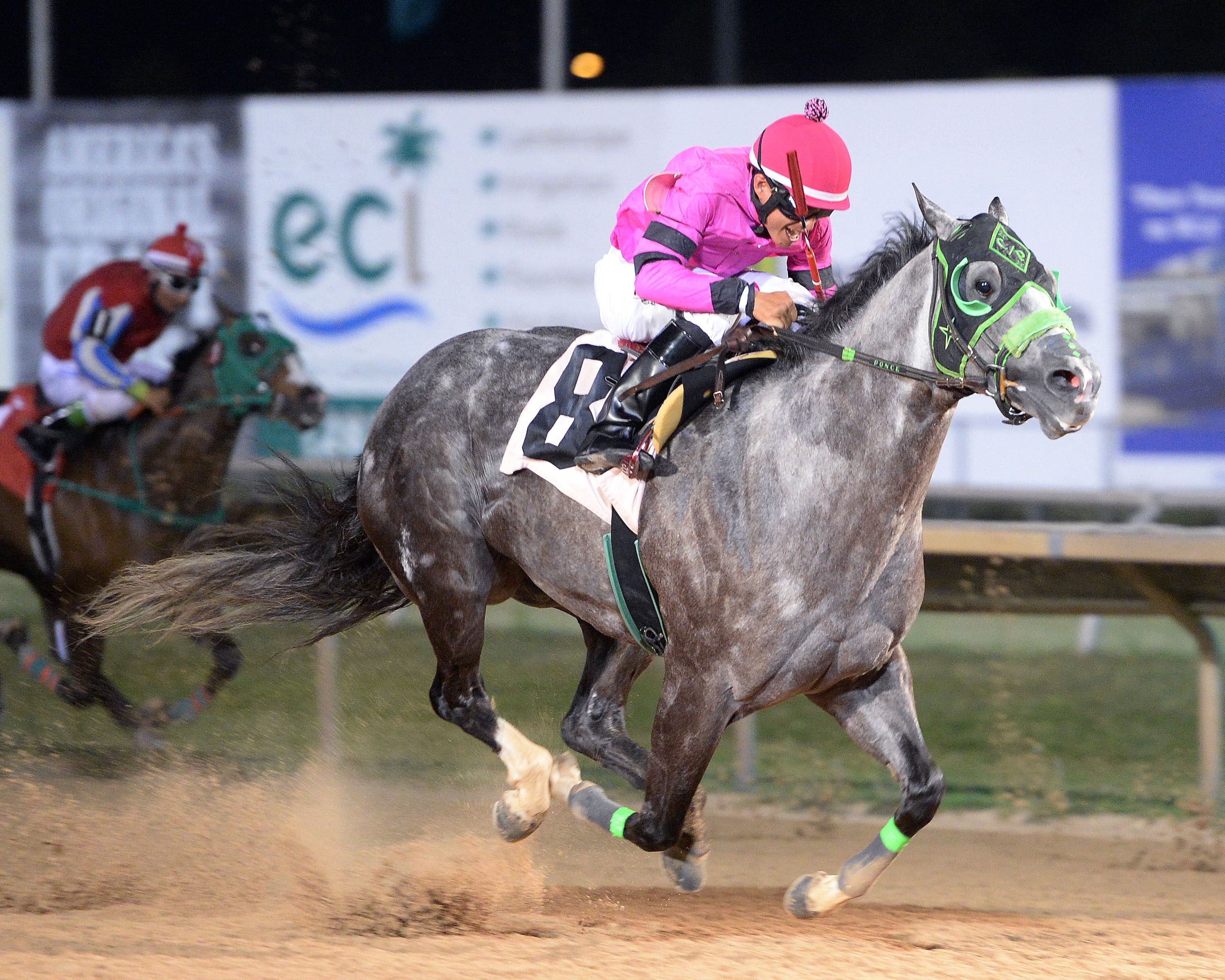 Sam Houston Race Park closed out its 2019 Quarter Horse live racing season with an excellent card featuring two stakes and the presentation of the end of meet awards to the leading owner, jockey and trainer.

The front-running duo cleared the rest of the field by over three lengths in the 440-yard stake. The final time of 21.687 earned a 95 speed index.

Victor Urieta, Jr. and Hawkeye ($4.60) started a bit behind Stone Cold Leader but closed strongly to pass him at the end for trainer Josue Ponce. The stakes win marked the fourth win on the card for Urieta.

"We were ready for the race; just needed a clean break,” Ponce said of the colt’s effort. “Victor said the horse just took off and he knew he could get the distance. It's an honor to train for Bobby Cox.”

Bobby Cox owns and bred the 4-year-old son of One Dashing Eagle out of the Runaway Winner mare No Fees. Hawkeye qualified for the All American Futurity (G1) in 2017 and the Rainbow Derby (G1) in 2018. He made his Sam Houston debut in April, in which he won the Harris County Stakes by nearly four lengths.

Classy Stone Cold Leader was the 6-5 morning line favorite due to his accomplishments as a dual futurity winner and a excellent showing in his 3-year-old campaign. The gelded son of Brookstone Bay has 11 wins in 21 starts and earnings of over $450,000. His wins include the $212,000 Firecracker Derby, the $160,000 Evangeline Derby, and most recently, the Delta 550 Stakes (G3), his first graded stakes win.

Stone Cold Leader’s regular rider, Rolando Pina, was aboard for his first start at Sam Houston. He is trained by Nason Eschete for Patrick Richardson.

"His break wasn't the world's best, but he tried hard," said Pina. “I can't complain; he's the best horse I've ever ridden."

Stone Cold Leader was bred in Indiana by Mark Michel, out of stakes placed mare Sheza Classy Leader, by Leader of the Class.

The race for third place was won by Sixes Flash and Rolando Cabrera. Barbara Alcantera trains for Rancho Herradura LLC. Sixes Flash was bred in Texas by Jerry Windham, by Streakin Sixes and out of Viborita, by Shazoom.

Sixes Flash has encountered Stone Cold Leader in each of his last three starts. His career earnings exceed $160,000.

Completing the field were Send Candy and Pop, Gianni Moons U, Sweet Annie GI and Jettin Feature. One Dream At a Time was scratched.

The final of the $81,400 Space City Maiden Futurity was contested Saturday night and Mr Tereso, the seventh-fastest qualifier from trials run on May 6, emerged victorious.

Mr Tereso is trained by Inez Delacruz for owner Jose Oviedo. Oviedo also bred the colt in Texas, by Man Who Wouldbe King and out of My Cold Corona, by Behold a Corona; My Cold Corona was the third-place finisher in the 2012 TQHA Futurity.

It was the first stakes win for Mr Tereso ($10.20), who reunited with jockey Rolando Cabrera, his rider in the trials.

"In the trial, he did not break," said Cabrera. "Tonight was much better

Third fastest qualifier Tres Y Seis finished second in Saturday night’s final. The son of Tres Seis debuted at Louisiana Downs before winning his trial by over a length earlier this month. Cipriano Vidana was aboard Tres Y Seis for trainer Jorge Barrera and owners Guerras Racing Stables and L and G Racing..

A neck behind Tres Y Seis in third place was post-time favorite and fastest overall qualifier Famous Cash Corona with Luis Vivanco in the irons.

Completing the field were Agavero Cartel, Treno, The Modelito Cartel, Panchos First Kiss, Tlc Signature, Patoranado and Be a Freighttrain.

Also on May 25, Sam Houston Race Park presented awards to the leading trainer, owner and jockey of the 2019 Quarter Horse meet.

Santiago Riojas, Jr. won the first leading trainer title of his career, finishing the meet with 25 wins. The 27-year-old horsemen, who was assistant to the late Eusevio Huitron, has 100 horses in training and will run next at Delta Downs and then  Retama Park. Last year’s leading conditioner, Leon Bard, finished second with 14 wins.

Francisco Calderon, who was the leading rider last year, held off a late charge from Jose Ivan Martinez to win his second title at Sam Houston Race Park. Calderon won  24 races, but did not ride the final weekend of the meet as he had mounts at Ruidoso Downs in New Mexico. Jose Ivan Martinez finished second with 21 victories and Victor Urieta, Jr. made four trips to the winner’s circle on closing night to clinch  third in the standings with 20 wins.

Sam Houston Race Park is Houston’s premier racing and entertainment facility, located just 15 miles from downtown Houston.  The Park offers a variety of attractions including our Suite Level featuring luxurious suites overlooking the racetrack and accommodating groups from 20 to 300 people, The Pavilion Centre, and award-winning dining options at the Winner’s Circle Restaurant and the Jockey Club.  For more information on upcoming shows, events and tickets, please visit www.shrp.com.