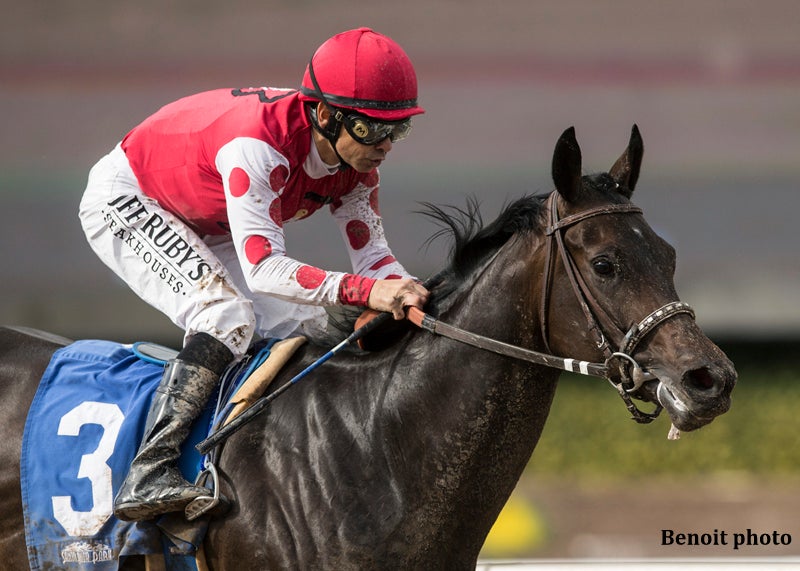 The Sam Houston Sprint Cup Renamed The Stonerside Sprint in Honor of the Late Robert C.McNair

HOUSTON, TX—Nominations have closed for the Grade 3, $300,000 Houston Ladies Classic which will be contested on Sunday, January 27. The mile and one-sixteenth main track feature anchors a rich stakes day on opening weekend of Sam Houston Race Park’s 25th anniversary season. The January 27 card will get underway at 1:00 pm (CT).

The Houston Ladies Classic closed with 33 nominations with considerable buzz on the 2019 debut of Midnight Bisou. Owned by Bloom Racing Stable, LLC, Madaket Stables LLC and Allen Racing, LLC, the daughter of Midnight Lute out of the Repent mare Diva Delight was bred in Kentucky by Woodford Thoroughbreds. She broke her maiden in her third career start, the Grade 2, Santa Ynez Stakes prior to winning the  Santa Anita Oaks last April. Next was the Grade 1, Kentucky Oaks, where she rallied gamely to finish third. After two defeats to the heralded filly Monomoy Girl, Midnight Bisou faced her once again on September 22 at Parx in the Grade 1, Cotillion. She finished a neck behind the multiple-stakes winning filly, but was declared the winner after the stewards ruled there was interference.

The Houston Ladies Classic will mark the start of her 4-year-old campaign and first race since finishing  third in the 2018 Breeder’s  Cup Distaff at Churchill Downs. She has been training at Fair Grounds under the watchful eye of Hall of Fame conditioner Steve Asmussen. Despite his status as the second-leading trainer by wins in North American Thoroughbred racing, Asmussen is a strong supporter of Texas racing, and has won ten training titles at Sam Houston Race Park. He was inducted into the Texas Thoroughbred Association Hall of Fame in 2017. He and his family reside in Arlington, Texas and his parents Keith and Marilyn operate a breeding and training center in Laredo. Asmussen reports that Midnight Bisou will van to Houston early next week and that Mike Smith will retain the mount and make his first trip to Sam Houston Race Park. Inducted into the Hall of Fame in 2003, Smith is the all-time leading Breeder’s Cup winning jockey and pilot of the legendary Zenyatta and 2018 Triple Crown winner, Justify.

Midnight Bisou brings a career record of five wins from 11 starts and earnings of $1,565,000. She is a finalist for Eclipse Award champion 3-year-old filly, along with Monomoy Girl and Rushing Fall. The winners in 17 categories will be announced at the 48th annual Eclipse Awards dinner and ceremony, presented by Daily Racing Form, Breeders’ Cup and The Stronach Group on Thursday evening, January 24, at Gulfstream Park Racing & Casino in Hallandale Beach, Florida.

Another Hall of Fame trainer, Bill Mott, has nominated Blamed, a Maryland-bred daughter of Blame. She has won six of her eight starts; most recently taking the Grade 3, Comely at Aqueduct for her owner Cleber J. Massey.   Lightly-raced Road to Victory is under consideration by conditioner Mark Casse. She is a graded-stakes winner with a record of three wins from four starts for owners Gary Barber and John C. Oxley.

Remedy, a 4-year-old Creative Cause owned by Twin Creeks Racing Stables LLC and trained by Brad Cox is another interesting nominee. She made her debut at Keeneland before breaking her maiden at Fair Grounds. Cox shipped her to Remington Park where she ran second in the Grade 3, Remington Park Oaks in September. The Kentucky-bred filly overcame a troubled start to finish second in the Comely Stakes on November 23.  Cox won the 2018 Houston Ladies Classic with Tiger Moth.

Inaugurated in 2013, the Houston Ladies Classic was formed to serve as the marquee race for Sam Houston’s Thoroughbred meet. Now in its seventh running, the mile and one-sixteenth Houston Ladies Classic anchors The Houston Racing Festival, which also includes the Grade 3, $200,000 John B. Connally Turf Cup, the $75,000 Frontier Utilities Turf Sprint, the $50,000 Houston Turf Stakes, the $50,000 Jersey Lilly Turf Stakes and the $50,000 Stonerside Sprint.

The Houston Ladies Classic was awarded its graded status by the American Graded Stakes Committee in 2016. Here are the previous champions:

Two-time champion Bigger Picture owned by Three Diamonds Farm, is nominated and will attempt to be the second turf specialist in Connally history to win three times. The 8-year-old son of Badge of Silver, bred in Kentucky by Kenneth and Sarah Ramsey, will make his 38th career start on January 27. His 11 career wins include five graded stakes. He eclipsed the $1 million earnings mark winning last year’s Connally Turf Cup, and has amassed $1,374,135 since making his debut in 2013.

His trainer, Michael Maker, has won six of the last seven editions of the Connally with Papa Bodie in 2012; Admiral Kitten in 2014; Coalport in 2015; Da Big Hoss and the last two years with Bigger Picture.

Some In Tieme (BRZ), runner-up in last year’s edition of the Connally, has been nominated by trainer Efren Loza, Jr. The 7-year-old son of Shirocco has earned $470,468 in 19 lifetime starts. He exits a fifth-place finish in the Grade 3, Sycamore Stakes last October at Keeneland.

The Connally Turf Cup was awarded Grade 3 status in 2006 and boasts a solid roster of champions including Chorwon, Fort Prado, Rod and Staff and three-time champion, Candid Glen.

Sam Houston Race Park will honor the late Robert C. McNair in one of the featured stakes on the Houston Racing Festival card. The Sam Houston Sprint Cup has been renamed the Stonerside Sprint in honor of McNair’s Stonerside Stable. The well-respected Thoroughbred operation, in central Kentucky, produced national and international racing stars, including Congaree, Bob and John, Tout Charmont and Chilukki. McNair sold Stonerside Stable to Darley in 2008 to devote his full attention to his Houston Texans NFL team and numerous philanthropic causes.

Stonerside Stable was also one of the leading breeders in Texas with an operation in Hempstead, Texas. Their stakes winners included Native Annie, General Charley and Catalissa. McNair’s Texas string was trained by Michael Stidham with John Adger serving as racing manager. Adger, who lives in Houston, is a Texas Thoroughbred Association (TTA) board member, and was a close friend of McNair, who passed away in November.

“Bob was a wonderful person, true gentleman and the greatest boss I ever worked for,” said Adger. “He cared deeply about Texas racing and enjoyed seeing many of his horses win stakes at Sam Houston Race Park. He brought both Valid Expectations and Too Much Bling to stand in Texas. Valid Expectations was the leading Texas sire for the longest time and now Too Much Bling continues to produce top racehorses.”