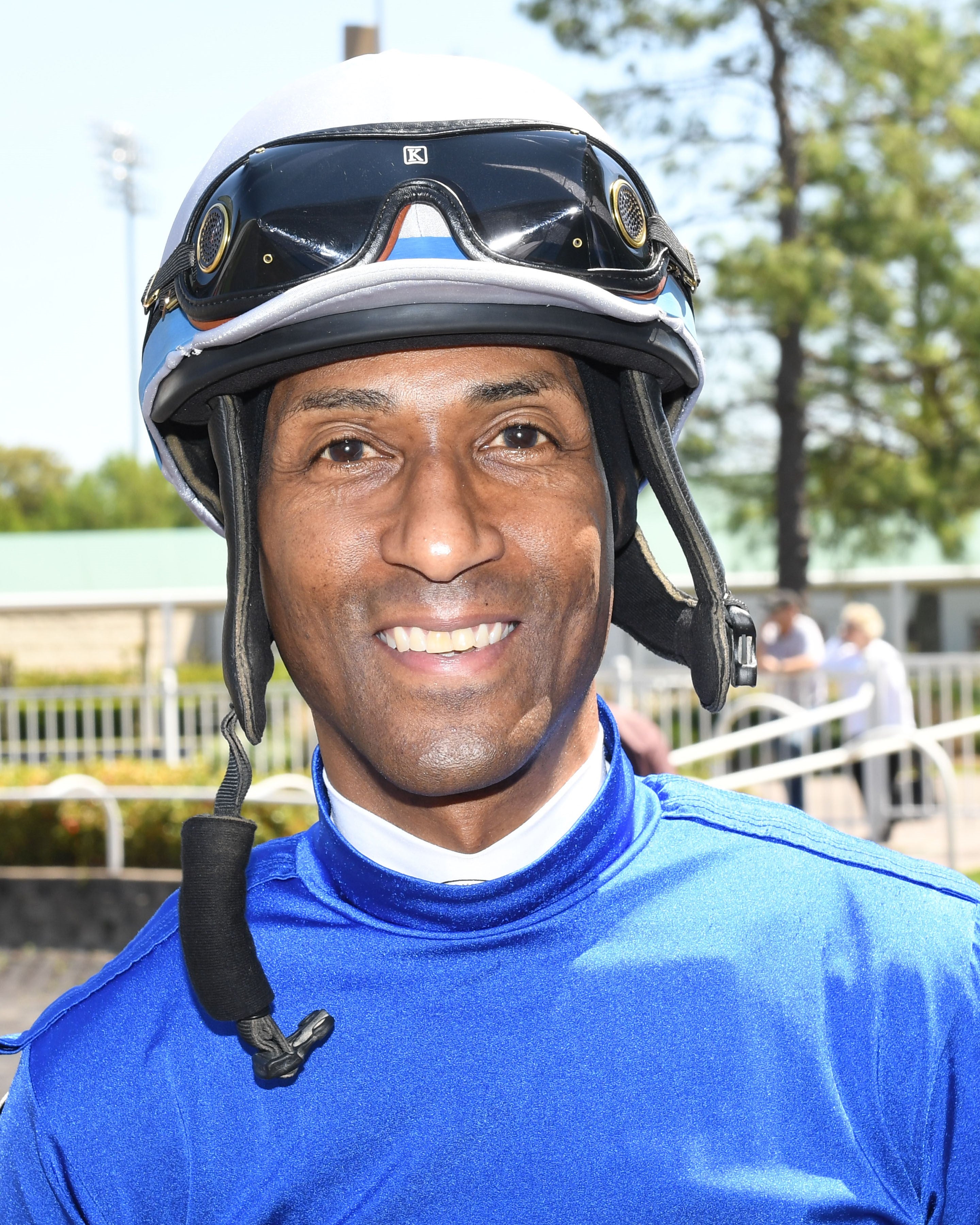 On Saturday, February 8, there were snow flurries at Turfway Park, in Florence, Kentucky. But at Sam Houston Race Park, jockey DeShawn Parker was happily booting home three winners on a balmy 66 degree evening under a full moon.  Was he happy about that?  Heck yes!

“The weather is one of the many things I love about riding in Texas,” stated Parker. “I rode in the snow at Turfway right before this meet opened. I remember saying to myself that I can’t wait to get to Houston!”

The feeling was mutual as the respected veteran has been a fan favorite since first riding here six years ago. He decided to shift his winter base to Sam Houston Race Park in 2014, and his debut exceeded his expectations. He came primarily to ride for trainer Eric Reed, but quickly caught the attention of many horsemen here and became very popular with racing fans as well.

He has built a lofty résumé since beginning his career in 1988. Parker has ridden 34,190 Thoroughbreds, winning 5,689 races (as of February 12, 2020) and over $70 million in purses. He is the all-time leading rider at Mountaineer Park in West Virginia, with solid showings in Ohio, Kentucky, Pennsylvania, Indiana and fortunately for us, Texas.

Parker finished second in the rider standings at Sam Houston Race Park in 2014 but won 55 races the following year to win his first title here. In 2016, he opted to ride at Oaklawn Park, but returned in 2017, finishing third. He was recovering from a broken collarbone in 2008 and missed the entire season, but made a triumphant return to Houston last year, winning his second leading rider title here. It was a dramatic finish as he added six wins over the last two days of the meet to draw clear over Iram Diego. He posted a stellar 60% in the money statistic, and captured two stakes, guiding the Direct Dial to victory in the Spirit of Texas for Steve Asmussen and Cowgirls Like Us in the Two Altazano for Bret Calhoun.

He is in demand for pretty much every trainer at Sam Houston Race Park, including Steve Asmussen, Bret Calhoun and Danny Pish, but has won races for horsewomen Danele Durham and Sarah Davidson, among others.

“I enjoy riding for everybody,” stated Parker. “There are so many trainers who have their horses fit and ready. I respect how hard they work and how well they support Sam Houston Race Park.”

Several times a week, track announcer Chris Griffin will give props to the high percentage duo of Parker and Calhoun, and more often than not, they will emerge with a victory.

“DeShawn puts his horses in the right place at the right time,” explained Calhoun.  “I have tremendous confidence in him when he rides for the barn. He’s an all-around solid rider and a great guy!”

Calhoun is based in New Orleans and may make one trip each season to Sam Houston Race Park, but he and Parker don’t require a great deal of strategy prior to a race.

“We do talk on the phone, but I don’t tend to give him too much in the way of instructions” added Calhoun. “If the horse has a quirk, I will let him know, but certainly do not have to tell him how to ride!”

The confidence in his judgement means a great deal to Parker.

“Sometimes too much detail gets into my head,” admitted the veteran rider. “It works best when I am allowed to ride the way I see it and made the necessary adjustments when needed.”

It’s very safe to say that Parker is confident, but never cocky. He still loves his profession and revels in a well-timed finish. On January 26, Parker’s closing kick on Red Lane Thoroughbred LLC’s Bodecream in the inaugural $200,000 Texas Turf Mile, was one of the most exciting finished on the entire Houston Racing Festival card.

“Man, he really exploded,” said Parker of the 3-year-old who may looks to be pointed to the Black Gold Stakes at Fair Grounds on February 29 for conditioner Danny Pish.

Parker, who will turn 50 next January, was born in Cincinnati, Ohio and makes his home in East Liverpool, Ohio with his wife and two sons.

He has tremendous respect for Texas racing and is pleased to be back this year with the added race dates and increased purses. Parker has always given high marks to the main track surface and Connally Turf course at Sam Houston Race Park but gives even higher praise to our fans.

"There are so many nice people here,” acknowledged Parker. “I have ridden at many tracks where unhappy bettors will yell and even throw things at you! The Houston fans are pretty much the nicest fans I have ever encountered; it is great to be back at Sam Houston Race Park!"