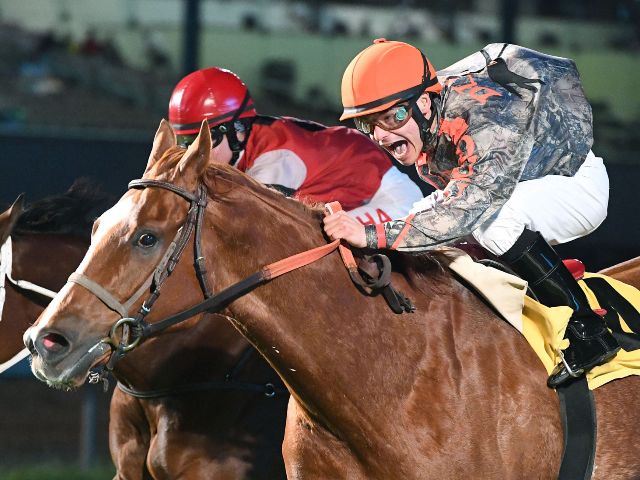 HOUSTON, TX- Sam Houston Race Park will present four stakes on Saturday, February 22 saluting Texas-breds. The ten-race card, which gets underway at 6:45 pm (CT), will include the $75,000 Jim’s Orbit; $75,000 Two Altazano; $75,000 Houston Turf and $75,000 Miss Houston Turf. The inaugural event serves as a preview for next month’s Texas Champions Day, which will feature seven stakes showcasing the established and rising stars of the Texas Thoroughbred industry.

Shes Our Fastest Leads the Field in the $75,000 Miss Houston Turf Stakes

Saturday night’s action begins in race six, with a field of 12 fillies and mares competing at one mile on the Connally Turf Course in the $75,000 Miss Houston Turf Stakes.

Shes Our Fastest owned by Mark Norman and Norman Stables Inc. will make her third start at Sam Houston Race Park as the 7-2 choice. The 5-year-old daughter of Oratory is trained by Scott Gelner and will be ridden by Iram Diego. The dark bay filly won the 2019 Yellow Rose here and followed that with a victory in the $65,000 Texas Stallion Stakes last May at Lone Star Park. Her most recent race came on January 10 when she finished third in the $65,000 Orleans Stakes at Delta Downs.

“She’s doing well, and we are looking forward to returning to Sam Houston,” said Gelner. “I would like to see her forwardly placed going two turns, but she can come off the pace if needed. Iram knows her well.”

Ivan Yanot’s Coraluna will make her first start since running second in the $50,000 Fiesta Mile on September 6 at Retama Park. The 5-year-old mare sired by Unbridled’s Heart is trained by Sarah Delany and has won six of her 17 turf starts.  Zarelda, a 5-year-old Golden Song filly, bred and owned by Billy Clevenger, ran second in the Yellow Rose and returns to Sam Houston for trainer Beverly Burress. Jockey Ty Kennedy has the call.

Post time for the Miss Houston Turf Stakes is 9:04 pm.

Next up on the card is the six-furlong $75,000 Two Altazano for accredited Texas-bred fillies. The field of six includes two fillies conditioned by Hall of Fame trainer Steve Asmussen.

Stillatune, bred and owned by Steve’s father, Keith, will break from post position three under jockey David Cabrera at odds of 7-5. The daughter of Intimidator has won her last two races at Delta Downs. She exits a $34,000 allowance sprint on January 10 where she rallied from off the pace to win by 1 ¼ lengths. Her top rival appears to be Brightest, a daughter of leading Texas stallion Too Much Bling, bred and owned by Will S. Farish. She made her debut at Remington Park last October, finishing tenth, but rebounded gamely with a maiden-breaking score on January 18. Rider Rudy Guerra has the return call.

Trainer Bret Calhoun, who has won the last five editions of the Two Altazano, has entered Dust A Flying for owners Wayne Sanders and Larry Hirsch. The Early Flyer filly is still a maiden but has run second or third in each of her four previous starts. DeShawn Parker will guide the bay, who drew the rail.

Two fillies from the barn of George Bryant will also run. It’s My Money will make her Sam Houston debut for owners Don Leach, III and Andrew Moran.  She will be ridden by Ernesto Valdez-Jiminez. Tell Me You Love Me, has made two starts this season here for HDT Allied Management LLC. Jockey Lindey Wade has the return call aboard the daughter of My Golden Song.

The second turf feature of Texas Champions Preview Night is the $75,000 Houston Turf Stakes. Twelve horses were entered and will compete at a mile and one sixteenth on the Connally Turf Course.

Roy W. Cobb’s homebred Mr Money Bags was installed as the 2-1 morning line favorite. The son of Silver City has won eight of his 11 career efforts and has never competed on the turf. Trained by Mike Neatherlin, the talented gray will be honored as Texas Thoroughbred Association Horse of the Year on March 22.

Another TTA champion, James Wessels’ Redatory has considerable success on the grass and trainer Allen Dupuy hope that the 5-year-old son of Oratory can replicate his victory in last year’s Richard King Stakes.  He got up just in time, at odds of 32 to defeat Bonjour Baby, who will also run in the Houston Turf Stakes.

Dupuy will give a leg up to DeShawn Parker, who will break from post position four on Saturday night.

“I always thought he would be a good turf runner,” said Dupuy. “His draw is perfect as he has a lot of tactical speed and should have a good trip from there.”

Dupuy was one of the original members of the Sam Houston Race Park jockey colony and has been training for the past five years.

“DeShawn came to talk to me about this horse,” added Dupuy. “I told him to watch some of the replays, but nothing more.  With as many races as he has won, I know he will do what he needs to do!”

2018 Houston Turf stakes winner Bonjour Baby, who is owned by Alvin Wong, will be ridden by Sasha Risenhoover. The 7-year-old by Sing Baby Sing is trained by Larry Stroope and will be seeking his tenth career turf victory.

Sunlit Song will make his 17th lifetime start for owners Carolyn Barnett and Becky Harding. The 5-year-old gelding by My Golden Song prepped for this with a third-place allowance effort here a month ago. Lindey Wade has the mount for trainer Mindy Willis. Trainer Danny Pish has two turf specialists entered in the Houston Turf, which will run as race eight. Woulda Coulda Did will break from the rail under Danny Sorenson and Lane Luzzi will pilot Cowboy Bling.

Four Recent Winners Vie for Repeat Trip to the Winner’s Circle in the $75,000 Jim’s Orbit

A field of seven colts and geldings will run six furlongs in the final feature on the card. The $75,000 Jim’s Orbit offers a solid group of stakes tested runners and several Texas-breds stepping up for the first time.

Good Judgement has won two of his three starts for trainer Steve Asmussen and has been installed as the 9-5 morning line favorite. Sired by Too Much Bling, Good Judgement broke his maiden on February 2 at Oaklawn Park and will be ridden by David Cabrera.  Asmussen has two other entrants in the field:  Bubba Bling, winner of the Texas Stallion Stakes last September at Retama Park and Lamp Oil, who will make his debut on Saturday night.  The Hall of Fame conditioner has won four previous editions of the Jim’s Orbit; his most recent champion was Direct Dial in 2018.

Trainer Bret Calhoun has two runners in the field. DeShawn Parker has the return call on Gold Pilot, a son of My Golden Song is owned by Wayne Sanders and Larry Hirsch, who also campaign Cafe Gold. Also sired by My Golden Song, Cafe Gold had no issue with a sloppy track here on January 22, breaking his maiden by 2 ¾ lengths.

Owner/trainer J. R. Caldwell will send out the most experienced entrant in the field, Wonders of Hislove. The son of Early Flyer has run eight times and exits a second-place allowance finish here two weeks ago. Regular rider Ivan Arellano will guide the chestnut colt from the far inside post.

In 2005, the Texas Thoroughbred Association named the colts and gelding division of the Texas Stallion Stakes for Jim’s Orbit, who won the Grade 2 Ohio Derby and started in the 1988 Kentucky Derby. The fillies division is a tribute to Two Altazano, winner of the Grade 1 Coaching Club American Oaks in 1994. The accomplished mare, owned by the late Harold V. Goodman, also captured the 1994 Sam Houston Oaks with Hall of Fame jockey Pat Day in the saddle.