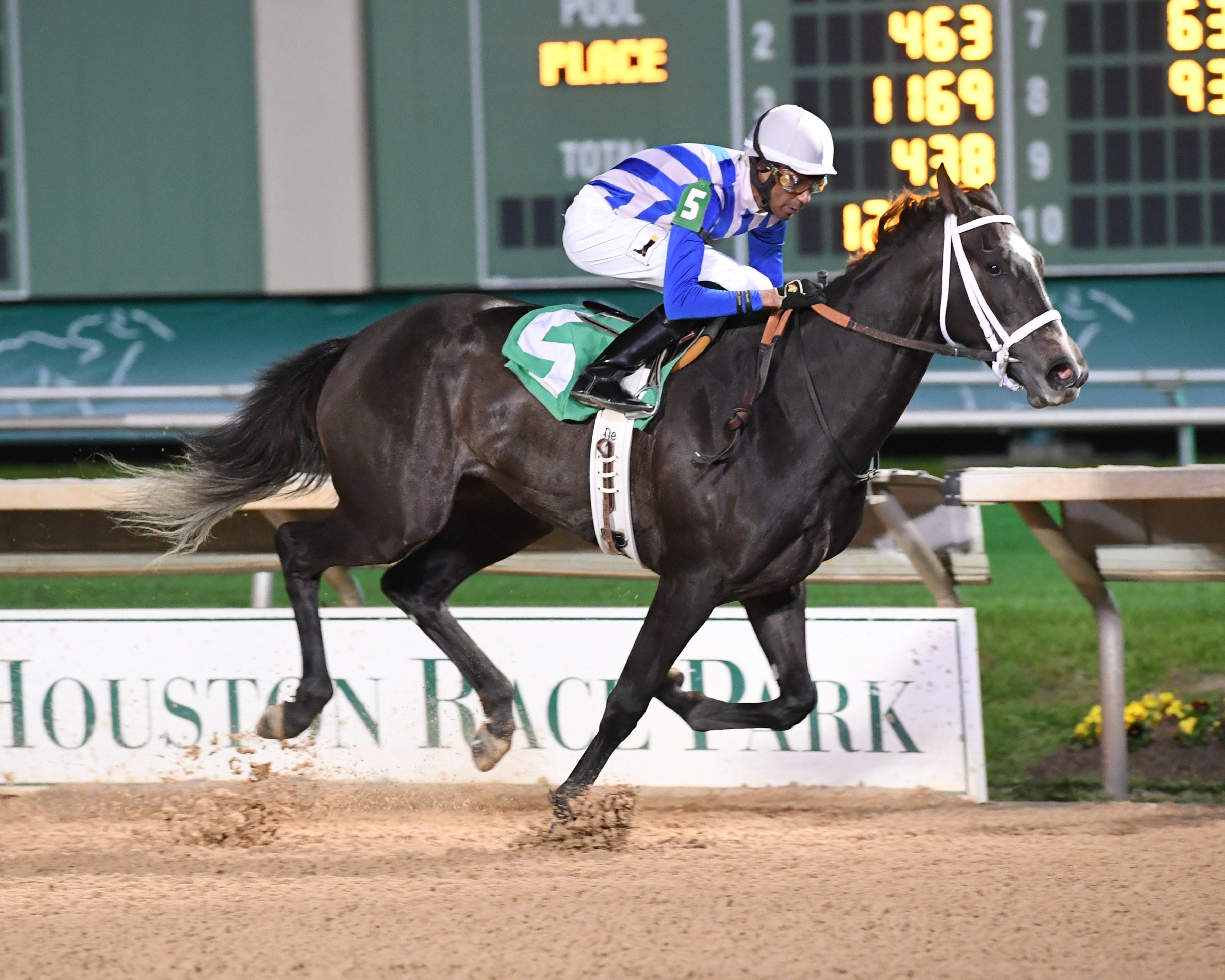 COWGIRLS LIKE US AND MR MONEY BAGS IMPRESSIVE IN THE $65,000 TWO ALTAZANO AND $65,000 JIM'S ORBIT STAKES AT SAM HOUSTON RACE PARK

Sam Houston Race Park hosted two stakes on the Saturday, February 23rd card and the favorites did not disappoint as Cowgirls Like Us prevailed in the $65,000 Two Altazano and Triple Crown nominated Mr Money Bags dominated his rivals in the $65,000 Jim’s Orbit Stakes.

Cowgirls Like Us Topped Six Fillies in the $65,000 Two Altazano

Douglas Scharbauer’s homebred Cowgirls Like Us showed her class in the $65,000 Two Altazano giving trainer Bret Calhoun his fifth victory in the six-furlong stakes.

The daughter of My Golden Song is a full sister to last year’s champion, Howboutthiscowgirl who was also bred by Scharbauer. Foaled in Kentucky, she entered tonight’s feature with more earnings and stakes experience than her rivals. Despite an earnest challenge from Golden Lullabye. the gray filly emerged on top, covering six furlongs in 1:12.40 over a fast track.

“It was a professional, workman-like effort,” said Calhoun via telephone following the race. “Six furlongs is a less than ideal distance for this filly; there was a little bit of a horse race down the lane, but she got the job done.”

DeShawn Parker, who is having an excellent meet at Sam Houston Race Park, rode the winner.

“Bret talked to me earlier today and told me to get her out of the gate as quickly as I could and keep her forwardly placed,” said Parker. “When she broke that good, I figured with her class that she would kick on and she did!”

“Bret’s a great guy and has given me many good opportunities,” added Parker, who missed the 2018 Sam Houston meet due to injuries.  “I’d like to thank him for all he’s done for me.”

The lightly raced Golden Lullabye, trained by Danny Pish, made her second start of the meet at Sam Houston Race Park for owner Sam Sherman.  Jockey Danny Sorenson had the call and dueled briefly with the winner, coming short just by a head. Stormieisblue, at 40-1, completed the trifecta under Bryan McNeil, followed by Whipum Naenae, Pick N Run, Legendary Song and Silver Coin. Stillaplay flipped in the paddock and was scratch by the track veterinarian.

Calhoun, who won this race last year with Howboutthiscowgirl; in 2017 with Archer City and previous editions with Bravura and Promise Me City.

Calhoun said he was unsure as to her next start, but will likely be looking for a two-turn stakes for the Kentucky-bred filly.

A field of seven colts and geldings ran six furlongs in the $65,000 Jim’s Orbit with a mix of stakes tested runners and several 3-year-olds stepping up for the first time.

Roy W. Cobb’s homebred Mr Money Bags shipped to Sam Houston Race Park on a mission. The primary goal was to win the stakes this evening and then proceed to the  Sunland Derby next month at Sunland Park.  The Triple Crown nominated 3-year-old made easy work of his six rivals, drawing off to a five-length victory in a swift 1:10.86.

The son of Silver City broke his maiden impressively last November at Zia Park. He advanced directly into stakes company, running third in the $75,000 Big Drama at Delta Downs on January 5. Three weeks later, he returned to action, drawing off by over five lengths in a $50,000 optional allowance sprint at Delta Downs..

“He’s a very nice horse,” stated trainer Mike Neatherlin. “From day one, he has always trained well, and we’ve had a lot of hope for him. “The track was very good; this might have been the fastest time of the meet.”

With three different riders in each of his previous start, Neatherlin selected Ernesto Valdez-Jiminez for tonight’s stakes and the Texas-based jockey did a fine job, setting the early pace and never relinquishing the lead.

“Ernesto put a good ride on him, but this horse is pretty easy to ride,” Neatherlin added.

Neatherlin and Cobb were partners on Kip Deville, who won the 2006 Texas Heritage Stakes at Sam Houston before advancing to national prominence as a multiple Grade 1 champion. The Oklahoma-bred won $3.3 million in his career and Cobb beamed as he showed his Kip Deville cap in the winner’s circle.

My Bling with Lane Luzzi up, rallied for second. The son of Too Much Bling won the Texas Stallion Stakes on November 15 at Retama Park and exited a fifth-place finish in the $75,000 Kip Deville Stakes at Remington Park for trainer George Bryant. Completing the trifecta was Truly Bling, under Sasha Risenhoover. He is trained by Calhoun, who also conditioned Gold Buyer, the fourth-place finisher and Mucho Dinero, who ran sixth. Lullaby Bling ran fifth and Roundaboutation was seventh.

In 2005, the Texas Thoroughbred Association renamed both these stakes to honor a famous Texas Thoroughbred.  The colts and gelding division at Sam Houston Race Park was named for Jim’s Orbit, who won the Grade 2 Ohio Derby and started in the 1988 Kentucky Derby. The filly division is a tribute to Two Altazano, winner of the Grade 1 Coaching Club American Oaks in 1994. The accomplished mare, owned by the late Harold V. Goodman, also captured the 1994 Sam Houston Oaks with Hall of Fame jockey Pat Day in the saddle.