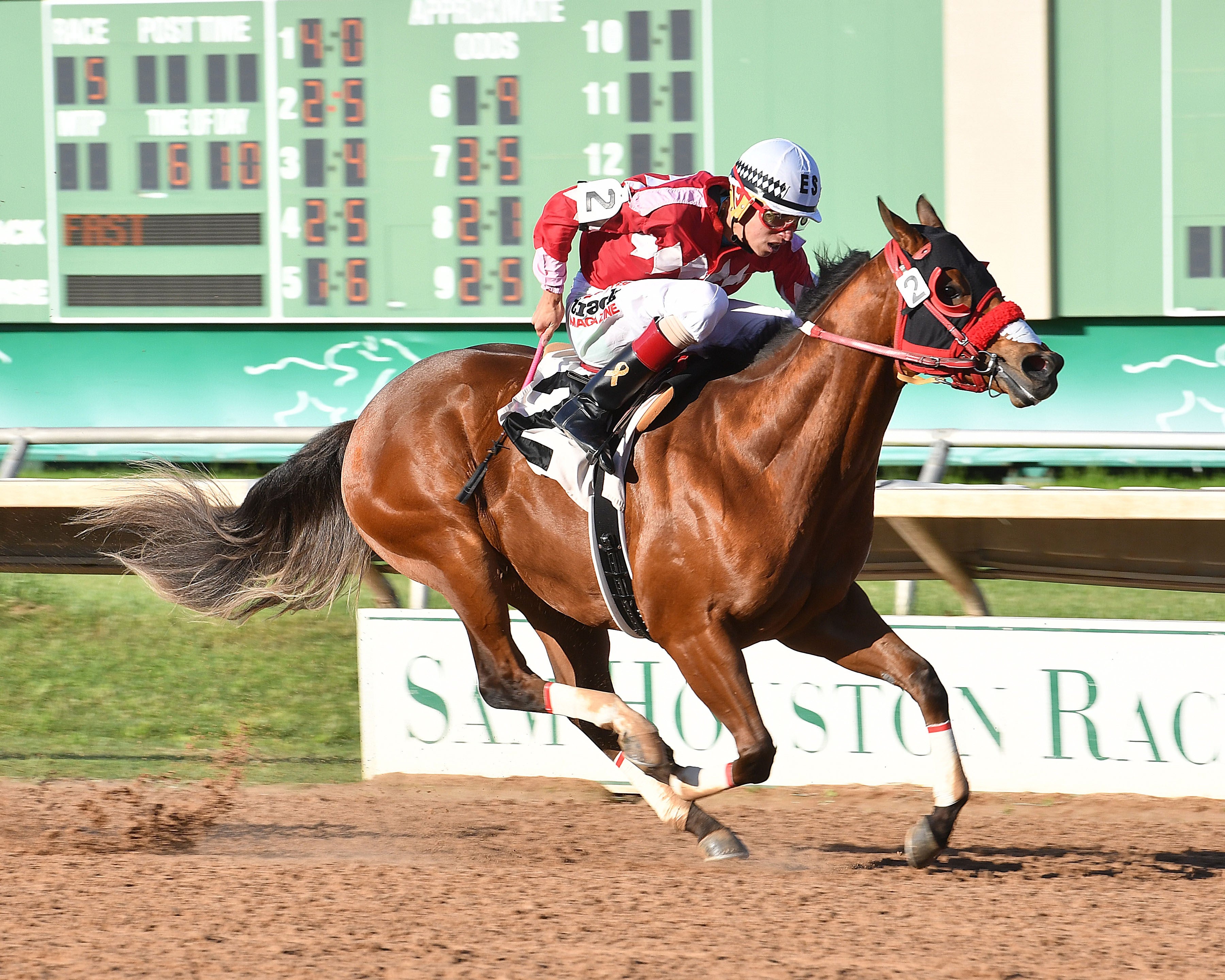 Sam Houston Race Park hosted 15 trials on Saturday, April 13 for the richest race of the Quarter Horse season, the $459,700 Sam Houston Futurity (G2). The fifth trial of the card produced the fastest qualifier when Trump My Record returned to the winner’s circle with an impressive gate-to-wire victory under rider Eddie Sanchez, covering 330 yards in :16.566 seconds.

Bred in Texas by Fulton Quien Sabe Ranches LP, the son of first-crop sire Apollitical Blood out of the Pyc Paint Your Wagon mare Breck N Records is owned by Cruz E. Nava and trained by his brother-in-law Arturo Davila III.  Purchased for just $10,700 at the TQHA Yearling Sale, he was victorious in the $254,070 Harrah's Entertainment Futurity (G3) on March 20 at Louisiana Downs and will attempt to win his second futurity of the year on Friday night as the 6-5 choice.

Nava, a resident of Lytle Texas, will attend Friday’s final with his family.

“I’ll admit that I am a little nervous,” said Nava. “It is a big race; we just hope for a good break and he should do well.”

Trump My Record is undefeated in his three starts and has banked $118,652 this year. His connections paid the $7,500 supplement for the Sam Houston Futurity.

Sanchez qualified three runners for the final, selecting Trump My Record as his mount.  Davila did a very good job securing jockeys for his two other qualifiers.

“All three came out of their trial races in good shape,” said Davila. “Trump My Record is very sound. Once Eddie made his decision, we started talking to riders. Pa Cha Ching impressed us, breaking his maiden in his first start. He’s a big horse and we know Ricky will give him a good ride. He will break from the same post as his trial, which is good. ‘Chico’ is a class rider and was more than willing to come in and pilot Mystic Lake.”

Pa Cha Ching, a son of Tempting Dash, won the ninth trial in :16.616, which was the second-fastest clocking of the night. Allen owns the dam, Toole N Round, who won the TQHA Oaks and TQHA Sires’ Cup Stakes at Sam Houston Race Park in 2006 and 2007.

Pete Scarmardo’s homebred Jess Dashin Along set the fourth-fastest time in his trial and drew post position three with jockey Francisco Calderon in the saddle.

“He looks good and Francisco said he pulled up well after his trial,” stated Scarmardo. “It is an excellent field, and it would be great to win it.”

The winner of the 2019 Sam Houston Futurity will earn $183,880.  Their name will be added to a distinguished list of past champions, including 2014 AQHA Champion 2-year-old colt, Kiss My Hocks; Azoom; Snowy Alibi, Ivan James, Especially Tres and This Is An Eagle.

The field for the Sam Houston Futurity, which will run as race eight, in post position order, with jockeys and odds:

“He went through quite an ordeal,” said Jordan. “But, he is out of ICU and is expected to be released from the hospital early this week. Next will be another recovery period in a rehabilitation facility.”

The encouraging news is that Bard is fighting on, even telling his staff which horses to enter in upcoming races.

“I have to give so much credit to his assistant Ricardo Aguirre, who really stepped up,” added Jordan. “With 65 horses in training, it’s a big job. Leon’s owners and his fellow trainer and friend, Jackie Riddle, came in from New Mexico. Leon has a lot of support.

His daughters have been with him in Houston and many of his owners have kept in close touch.

“I visited Leon in the hospital on Saturday,” said Pete Scarmardo. “He is fighting hard and we all know that it will be hard to keep Leon down.”

Bard will be well-represented on Friday night with finalists running in each of the three features on the card.

Bard’s first call rider Francisco Calderon, who won the 2017 Sam Houston Futurity for Bard aboard This Is An Eagle, will be highly motivated as the meet continues.

“It would mean a lot to me to win on Friday night for Leon,” said Calderon.

Seven trials for the $167,500 Sam Houston Derby (G3) were contested on Friday, April 12 and a very talented group of 3-year-olds will compete in Friday’s 350 yard final.

The 6-5 morning line favorite is Eysa Jess Jumpn, owned by Jose Estrada Quarter Horses and conditioned by 26-year-old  Josue Huitron. The talented filly drew off by 2 ½ lengths as she won her 350 yard trial in :17.518 seconds.  Rider Guadalupe Lucio, Jr. guided the daughter of Heza Fast Dash out of the Mr Jess Perry mare Jess Jumpn, who earned a 97 speed index.  Bred in Louisiana by Spring Hill Farms & Sherry Dunn,  Eysa Jess Jumpn was a $11,500  purchase at the 2016 LQHBA Yearling Sale and has won seven of her 10 starts, with earnings of $442,870. She drew the rail for the final.

“We have her at Delta Downs and will van her over on Friday,” said Huitron. “I’m fine with her post; she broke from the rail in the trials for the LQHBA Louisiana Million. This filly runs from anywhere she draws.”

The son of  Jet Black Patriot was the first of three Sam Houston Derby qualifiers who will run for trainer Rolando Almanza. Racing for owner Claudia Avila, the black gelding won the 2018 Dash For Cash Juvenile at Lone Star Park. Dash for Cash Futurity champion Paint Me a Sinner,. A daughter of Pyc Paint Your Wagon is also owned by Avila and ridden by Ricardo Garza-Cruz. Mr Corona Crystal, a colt by Mr Jess Perry, owned by Hector Reza, completes the trio.

2018 leading Sam Houston Race Park trainer Leon Bard qualified LJ Moonrise, a filly by Separatist for owners P and J Racing Ltd. Bard’s first call rider Francisco Calderon was aboard for her win in the ninth race, where she set the third-fastest time of :17.649.

The field for the Sam Houston Derby in post position order, with jockeys and odds:

The $45,970 Sam Houston Juvenile, at 330 yards, will run as the first stakes of the  evening. The field is comprised of 2-year-olds that competed in trials for the Sam Houston Futurity three weeks ago but did not qualify in the top ten.

Baby Licious has been installed as the 2-1 morning line favorite.  The daughter of FDD Dynasty is owned by Muzquiz Javier De Los Santos and finished second to Trump My Record in the $254,070 Harrah's Entertainment Futurity (G3) on March 20.

"We are pretty high on our filly, who almost beat Trump My Record in the futurity at Louisiana Downs," said trainer Arturo Davila, III. "She came out of her Sam Houston Futurity trial well and we like her chances on Friday."

Another 2-year-old likely to get his share of attention is Expedyte, a Freighttrain B colt owned by Raedele Phipps and trained by Josue Ponce. He won his trial in :16.878 under rider Jesse Levario, despite being bumped out of the gate.

The field for the Sam Houston Juvenile, which runs as race six, in post position order, with jockeys and odds:

Photos of  Trump My Record and Leon Bard: Coady Photography